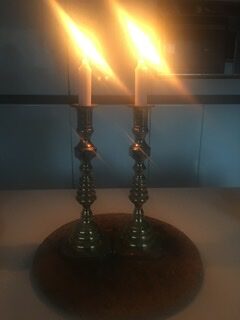 Every Friday evening, I post a Shabbat message. Sometimes it’s something that has happened that day or week that I’d like to write about. Often, it’s preceded by a quote upon which I expand and make personal.

It’s never political; Shabbat is a time where we relax and leave the world behind for a day.

But today, the remembrance of 9/11, I was compelled to not only tell my “where were you” story for the first time at length, but also to include the growing feeling of unrest in society and how that ties back into 9/11.

Here is what I posted on Facebook; too long to post on Twitter, and worth making permanent, so I am sharing it here on my site.

I’ve never really written a formal account of my “where were you?” moment, but today, a Shabbat on which we are looking at yet another Middle Eastern country announcing its intention to normalize ties with Israel, it’s the perfect time for me to write out what happened in my life that day. And how it is affecting me in particular this year.

I had fractured my leg two weeks earlier – a stupid accident in my house. I was given a date to return to the hospital’s orthopedic clinic: September 11.

As I was unable to drive (painkillers as well as my right leg being incapacitated), I was being driven to the hospital. The appointment was for 9:30. At 8:50, while in traffic on the way in, my dad called to tell us to turn on the radio.

“A plane just flew into the World Trade Center,” he said, and we began to listen. We talked about how it might have been a disoriented pilot, and not being in front of a television – and no smartphones back then – we could not see the devastation.

When the second plane hit, we were in shock, and it was now obvious this was no accident.

Information was coming in fast and furious, and by the time I was dropped off at the hospital, we knew the planes had been jumbo jets. I couldn’t even process what that meant for the people involved on the planes and in the buildings.

Inside, a long wait to be seen, no televisions or phone to consult, I was very disturbed by what I knew but was also blissfully oblivious. For those three hours, I was still suspended in limbo in the world I had left when coming into the hospital. The world that had changed within the time I spent reading my book.

When I was picked up to be taken home, it all assaulted my senses at once: the towers have collapsed. Another plane hit the Pentagon (the Pentagon?? The seat of America’s military? How could this be??). A fourth plane had gone down in a field but was rumoured to have been heading to the White House or the Capitol. This could be World War 3.

The drive home brought forth my emotions. Every building along the TransCanada highway had flags at half-mast. Many of those buildings are manufacturers which are Canadian headquarters for international or US companies. I saw one after the other expressing grief and support for our American friends, and that’s when I began to shed tears.

My kids were 5 and 9, one in pre-kindergarten, the other in Grade 2. Should I go get them? Are we safe? Will it happen here?

In the end, I left them there. When I came home, I turned on the kitchen television and that’s when the shock and abject horror hit. I could now see what had happened.

It took me some time to process. I was alone in my house, on crutches, and trying to process this new world. I had to prepare for telling my kids.

When they came home, they were able to see the replays being run on a loop. They asked me what happened.

I gathered them both to me, and told them the truth, in an age-appropriate way:

“Four planes were taken over by very bad people. They crashed into those buildings and into a field. There were many people who were hurt and killed.”

“Mommy, why did they do that?”

“Because they are very bad and because they don’t like people who don’t agree with them. Maybe they’re jealous. But they are bad, and we are SAFE. This is NOT going to hurt our family. We have to remember the people who died today, and always be careful, but we are SAFE.”

Friday of that week, the National Prayer Service took place, broadcast and enacted across the world. As I stood on my crutches in my kitchen, in tears, I watched the camera capture the clear blue skies over the towers of our Parliament, and it occurred to me that we were NOT invulnerable, nor should we let our guard down.

The following week, Osama bin Laden’s picture was on the front page of our newspaper. He had been interviewed in a cave, laughing over how he hadn’t expected the towers to fall. My 9-year-old took the paper to school and asked his teacher if he could talk about it. A reticent, language-delayed kid, he stood in front of the class and talked about what we had been continuing to discuss at home. The teacher called to tell me how impressed she was.

The emotions are always front and center. How could they not be?

I do not get political in my Shabbat posts. But I will make an exception today.

Nineteen years ago, police officers were heroes. Lauded as heroes. Rescuers of countless lives, and unborn lives. Those who had run back in numerous times, to a burning building, only to have it collapse on them. Those who survived but have been living with the horrors they saw that day. Police were honored that day, and for many many years to follow.

But this year, they are villains. Not just the few whose actions have taken lives unlawfully or due to poor judgment. Those are few, and far between.

But ALL law enforcement is being vilified. They are the targets of those who want a different world, a different country, those who believe police departments should be defunded, abolished, police officers fired or “reallocated” into other roles.

It is incredibly disheartening. There are police officers who have lost their lives in this uprising. Police are targets of violence on a nightly basis in many cities across the USA. They are being pummeled with rocks. With commercial-grade fireworks. There are a number of police officers permanently blinded from lasers being pointed directly into their eyes.

Police officers, like military personnel, are special individuals. They literally put their lives on the line ever single day, to keep ours safe. Do they always succeed? No, but that doesn’t mean it is always their fault. And it doesn’t mean law enforcement is evil, just as one bad apple hasn’t rendered every investment firm evil either.

Imagine, those of you who want the police defunded, in 2001; had there not been brave, heroic police officers sacrificing their lives, their health, their peace in order to save so many others – what would this world look like?

19 years ago was not the last time we will be attacked. The terrorists still have the west on their radar, and will attack again.

Where will we be as a society when that happens, if we have no brave law enforcement and first responders to once again rush INTO danger to save the vulnerable?

I am so disheartened by the move to defund law enforcement based on a false narrative. It is short-sighted, it is dangerous, and it is wrong.

So pardon me for going political on this Shabbat, the last one of our year; the date is a charged one emotionally, and more so this year.

Find peace where you can. For me, it is in the knowledge that my family is well, secure, and protected by the police officers who – just 12 years ago – proved that they are here for us personally (another writing, another time). I feel safe.