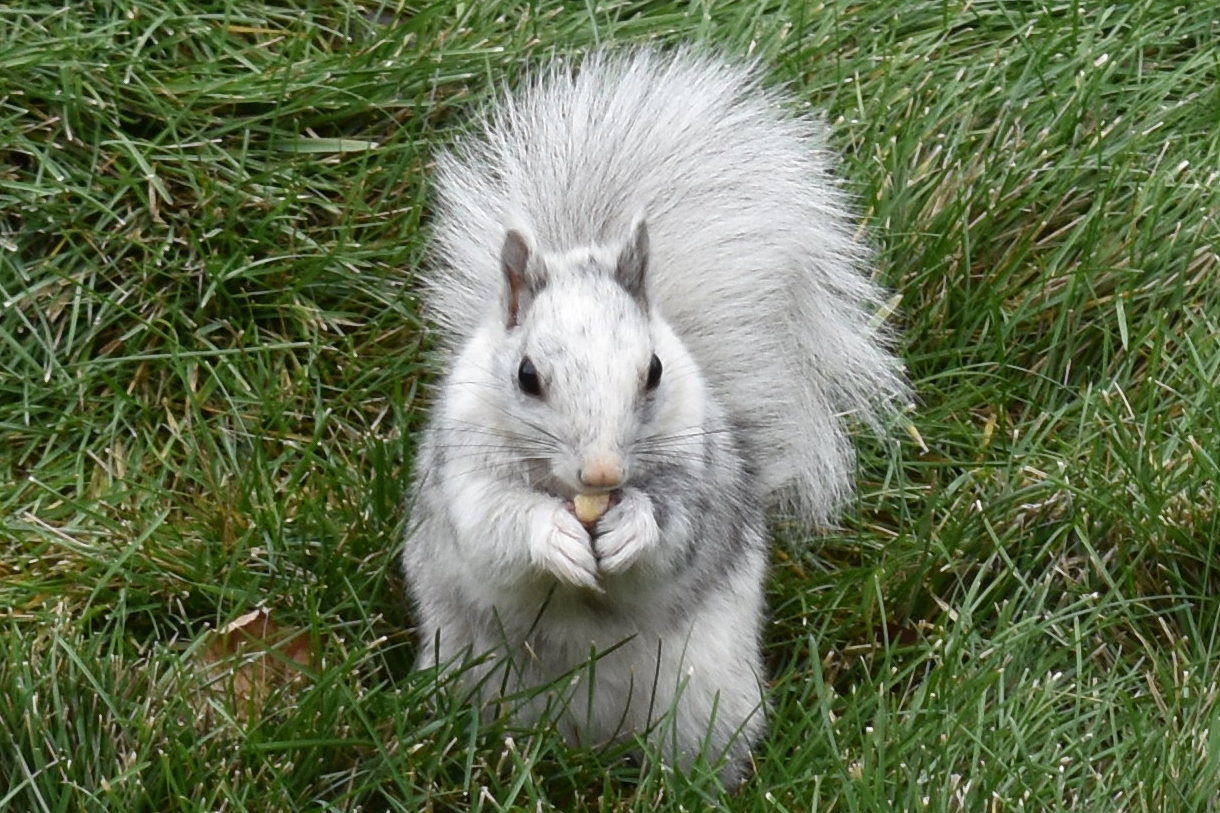 Last September, a little white squirrel showed up in my back yard. I took a photo of it, with my iPhone, intrigued by the coloring. A couple of weeks later, it showed up again, and by now, I was enamoured.

I called my dad and told him about it, saying, “Well, now I guess I have to name him.”

For those who don’t know, Yankel is a male Yiddish name, translating to Jack, or Yacov. My grandfather – my dad’s dad – was Jack, which may be why it came to mind.

So, Yankel it was.

I began to see Yankel a lot, giving me many opportunities to take photos and videos.

Very shortly after sharing a video, a friend who knows nature said, “I don’t believe Yankel is male.”

It seems he was familiar with squirrel anatomy being rather prominent (growing up in rural areas lends itself to knowledge not particularly accessed by city folk like me), and in one of my photos, he did not see male anatomy present on Yankel.

The name had stuck, though. And my father instantly suggested I add “le” – making it Yankelle.

As clever as that is, I just stayed with the original name.

I began to watch for Yankel. When she came to visit, I began throwing unsalted peanuts to her, making sure she saw me toss them out. She began to respond, as well, trusting me enough to come down to the grass and eat the offerings.

One day, I saw her on the fence. Excited to take photos with my DSLR, I ran to get peanuts. By the time I looked out again, she was no longer on the fence.

I went out onto my deck, and began to click my tongue, mimicking squirrel calls. Within 10 seconds, I saw a flash of white running across two back yards to get to mine.

That connection became real. And I began to make regular attempts to call to her, using peanuts to gain her trust. After a few times, I began to talk to her as she ate, so she could hear my voice and not be frightened.

(I admit to calling her by name – but she hasn’t responded to that. Yet…)

One day, I saw her in the front yard of my neighbor’s house. I called to her, threw peanuts for her, and was able to coax her closer. I went inside, but a few minutes later, saw her on the rock right outside my front door. We had a great photo session that day.

When the snow fell, I worried. (Okay, I’m a Jewish mother, that’s my default position) But soon, she showed up, and I made sure she was well supplied with peanuts.

It got to the point where the grocery list included “peanuts for Yankel.”

Even after snowstorms, Yankel came to visit and get peanuts. But after the snow began to melt, I stopped seeing her for a few weeks.

Just this past week, she showed up again, brightening up my days considerably. I once again showed her that she can count on me for food. She showed up in the front yard, this past Monday evening. On Tuesday, around the same time, I went to my deck instead, in back. Given that her pattern includes hopping off through the fence toward the back, it seems that is where she may go to her home.

Tuesday, she wasn’t there, but I did the call anyway. After a few minutes of no response, I was about to go inside but a flash of white caught my eye. She peeked her head through the slats of the fence separating my yard from the neighbor’s, and I grabbed the jar of peanuts.

I continued to throw peanuts to the grass, and she came to get them.

Wednesday evening, around the same time, I went outside, called to her, and was rewarded within seconds. This time, she would eat a peanut, then stuff 3 into her face, and bury them all around my yard. Watching her industriously dig holes, deposit nuts, and bury them was utterly intriguing.

Then came Thursday, when I tried to call to her, to no avail. I figured she might not be “in the neighborhood” so I gave up after some time.

Today, something happened that triggered emotions of all sorts.

I got a text from my friend Mallary, who said she had a pit in her stomach. She had been driving home, and saw a white squirrel lying in the road. She told me where it was, and said she hoped it wasn’t Yankel.

She explained that she didn’t know how else to tell me other than straight up. Though I was sick to my stomach, I had to go find out. Knowing is better than not knowing.

Dragging my husband along in the car (I couldn’t be alone if it was her), we drove to the area Mallary had indicated. By now, I was in tears.

I scoured the street in front of me where the squirrel was said to have been. Part of me hoped there would be no body, in case she had been stunned and then recovered.

But to our right, half a block down, there was a squirrel in the road.

I approached slowly, dreading it. And I knew I had to look.

To my absolutely elation, it was not Yankel. The squirrel was not white, it was light beige. The sun is strong today, and it’s likely the squirrel could have appeared white when Mallary saw it.

When I got home, I called Mallary to tell her the good news. I told her that only a true friend would have done what she did. She may not be as emotionally invested as I am (okay, I know most people don’t get as emotionally attached as I do), but as a friend, she understands my feelings for this little squirrel and knowing is better than not knowing.

It got me thinking about why this squirrel is so special to me.

Yes, her coloring is unique, her clear recognition of my vocal cues and my feeding her are what keeps bringing her back to my yard.

But Yankel showed up at a time when the lockdowns were dragging into the 6-month mark, and provided a very bright respite from the restrictions of lockdowns.

I also have a very strong belief in the gifts we find in Nature. I have a strong connection to that which is to be felt, the spiritual and the unexplained.

I believe that animals appear to us when we need to understand their lessons.

I visit a local lake every year on the anniversary of my mother’s death, and the birds that appear to me are – in my heart – nothing less than gifts she sends me as signs. She loved birds, and I have had encounters with some very special ones at that lake.

The Tiger has been a part of my life for many years, as a Spirit Animal, showing up in times when I least expect it.

I’ve gone whale watching many many times, and the whale is another animal that plays a strong role in my life.

Each animal has meaning. From Toltec, to American Indian, to Pagan, to other belief systems, animals showing up in a person’s life means more than just a sighting.

So, what does Yankel mean? I haven’t done the reading on that yet. I will.

One thing I do know: she is a very special gift from Nature. Her unusual coloring (not pure white, but white with patches of dark grey), her repeat visits, even her personality have become beacons of light in this never-ending time of Uncertainty.

Her name, given to her by my dad, makes her that much more unique and there is a sense of fun in every day when Yankel appears.

I’ve wanted to write about her for a while. Today’s scare, truly invoking the depth of emotions, has been the catalyst for this entry into my personal blog.

Many of my friends on Facebook, and in my offline life, have known about Yankel. Now it’s time to share her with a wider audience.

Here are some of her photos – she’s rather photogenic as well as uniquely special.

Not everyone gets it. I understand that. To many, squirrels are a nuisance, a rodent, or just taken for granted.

Perhaps, if you’re one who’s in that group, my story and photos can help you see past previously held impressions of squirrels. If not, that’s okay too.

I’m not naive. I know Yankel is in constant danger. But I also know she is a smart little thing, and I hope that will carry her through to survival.

At least for a few more years of enjoyment and bonding.

Because sometimes, all we need to break through the veil of clouds is a ray of sunlight in the form of a little white squirrel named Yankel.

(If you click on the first photo, you can scroll through the enlarged images)