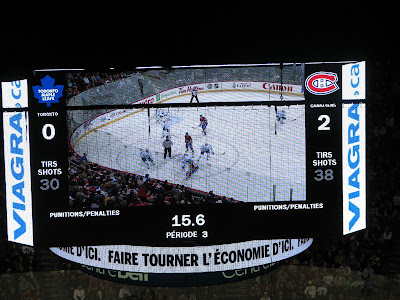 (Click to see the photo larger, in all its shutout glory) (Lissa Albert)

I am inspired to write about my first regular-season game experience after having become a savvy hockey fan.

We got the opportunity for the cheap seats for this game, and when I told the kids we had tickets, I’d just gotten them…it was a day off school for them. I woke them specifically to tell them and Josh, my regularly-zombie-like-in-the-morning 17-year-old, actually woke in an instant with a big grin. Sam, then 13, was incredulous. “We’re going to see Toronto?” Yes. “We’re going to be at a Leafs and Habs game?” No, a Habs and Leafs game, but yes. He was ecstatic.

But I had no clue what to expect – I’d been to my first Habs game in YEARS just that September, a pre-season game we won against Ottawa, but I had never been to this match-up. (For those not in the know, there is a deep – usually friendly – rivalry between Montreal and Toronto, on many levels; but in hockey, it’s personal, it’s religious, and it’s fiercely fun) I was told to watch out, it will be a very emotional arena, and wow, was it ever!

Just the Metro ride was anticipation. But when we arrived at the Bell Centre, we were met by pockets of blue and white jerseys. I’d expected some Leafs fans, but this many? Then I remembered that the Als were about to decimate the Argos the next day for the Eastern Conference Grey Cup finals (for my non-Canadian friends – that’s our Super Bowl and yes, we put the Toronto Argos away and went on to win the Cup for the 2nd year in a row), and it all made sense. The first guy I encountered, in his group, said, “go Leafs!” I didn’t look at him – he was massive and I’m not – but I said, “Well, no, actually, I hope you’re not too disappointed when we beat your team tonight. But hey, welcome to my city!” I got out of there pretty fast.

Got our seats, kids wanted food but the warm-up started, so we rushed back to the seats. The roars greeting the Habs were expected; the boos greeting the Leafs were as well. But the volume was WAYYYY up and the grin on my face started to become permanent. There were pockets of Leafs fans throughout the stands, chanting their pathetic encouragements for their team – to which I started my robust “Go Habs Go!” Of course that’s all a Habs fan needs, and soon, it was Dueling Team Chants.

When the teams came out on the ice for the beginning of the game, after the flag-bearers did their thing, the arena went dark and the announcer began talking about the late Pat Burns. I knew there would be a tribute, and the hush that fell over the normally bustling Bell Centre was instant. They talked about Pat, and then a short video (well worth your time) was played. The fact that he’d coached both teams playing this night was incredibly poignant. There had been rivalry in the stands but we all cheered together as one team for this coach. When the ice became a portrait of Pat and the logos for all 4 of his teams, we were asked for a moment of silence (you can see this in the video) – I had never thought the Bell Centre, at a hockey game – a Habs vs Leafs no less – would be this silent. I was overcome with emotion as everyone paid tribute to this honorable man.

Then the game. And WOW. Scoreless first period had me standing in line, antsy to get food and back to my seat, and suddenly I felt a Presence behind me. A tower, no less, of a man – and all I could see was blue and white because being (as Tyg likes to put it) “fun-sized”, I came up to this guy’s navel, that’s how big he was. No way was I going to start up with THIS Leafs fan! But he was greeted heartily by comrades from his faction as well as ribbed good-naturedly by Habs fans and employees of the Bell Centre who passed us on their way to other places.

I saw the count-down clock getting closer to the 2nd period, and left my line. Food could wait. Hockey could not.

When Jeff Halpern scored that first goal, the place erupted. My throat was already raw from cheering for the Habs and how they dominated the ice (our penalty kills looked like power plays as we kept the puck well in front of Gustavsson for many of those minutes). But this exceeded ALL expectation (and decibel level)!! The animators in our section went up and down the steps high-fiving everyone, till they came to the lone Toronto fans in our section who didn’t want to high-five anyone (awwwww…but why?). The Centre was in a frenzy as the announcer boomed out Halpern’s name, and it was Game On.

I got my food for the 3rd period (note to self – and anyone visiting Bell Centre: get your pizza in the first period or intermission; by the time you get in in the third, it’s rewarmed and not very cheesy at all) which proved to be even more exciting as Toronto TRIED to rally. A very lovely, well-placed pass by Mike Komisarek gave Cammy our insurance goal. But wait! Komi doesn’t play for Montreal anymore! Oops!! Even better!!

That goal was the one that had me losing a few notches of hearing but not caring one bit. It was 3rd period, we were on our way to a shut-out, and it was the Leafs!!

When the voice boomed “one minute left in the period” I thought the rafters would come down. They tried playing hard but…it was the Leafs. And we played for all we were worth to get Carey Price his shut-out prize. When the countdown to the end of the period threatened to explode the roof off the place, I was ecstatic – my boys were beside themselves, and this was the night I’d hoped to create for them – but I got it back in spades.

Walking down the steps, everyone singing the olé song at the top of their lungs, I didn’t seem to meet those pockets of Leafs fans I’d seen spouting at the beginning of the game. Hmmmm…could they have left EARLY?

The first order of business, after getting settled, was to text a rabid Leafs fan the photo of the scoreboard. He wasn’t amused, but it’s all in good fun (which is also one reason I HAD to be at a winning game – he’d have trounced me had we lost).

I knew this game would be filled with emotions of all sorts (added to by the Pat Burns tribute) but I had never experienced a night at a hockey game that would have me saying, “I wish I could see this game all over again.” Me? Reliving a game? I’m not a new hockey fan, I’m just new to understanding the sport, and my fanaticism has burst to levels heretofore unknown to me! But it wasn’t just the game, it was the entire spirit at the Bell Centre that made me feel so much a part of a group that is as cohesive as a huge family. Strangers high-fiving one another, talking about the game like it was a family reunion, and it made me see the heart of what sports can do: bring people together in entertainment and a little bit of escape in a long week or month, or a tough time. Nothing bonds like a common experience and when that experience is bound by a deep commitment, there are no limits to the wonders it can bring, truly. And yes, I know it’s a hockey game – but it made me think about what this sport does – for people, for my City, for my kids, and now, for me.

After the game, my boys proclaimed their “perfect record” – they had been to a Habs-Tampa Bay game in February with my dad (their first); I got them tickets to the 3rd game of the Eastern Conference Final against the Flyers in May; we saw the pre-season game against Ottawa in September and now, this was their 4th Habs game. Each game my kids have attended, the Habs have won. I think I’ll buy those boys season tickets!