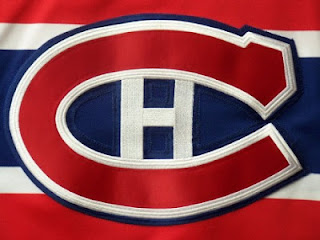 (let me get this out of the way – most people reading this will already know that the Habs lost 2-1 last night. Okay, bandaid’s off, on with the blog)

Thrilled that my optimism had paid off, and hockey was returning this season, I immediately set out to try and get tickets for the opening night. I wanted to take my kids to the game because it was, after all, the opening night, a post-lockout opener, and it was Habs vs. Leafs. So last Sunday, I sat online and scored tickets in the Family Zone where it’s affordable and where it’s just as exciting to attend a Habs game. We could hardly wait and finally, the day was here.

Clad in all our Habs gear (yes, I will rock my P.K. Subban jersey), we made our way to the Bell Centre in a heavy snowfall. Got to our seats and waited for the opening ceremony. One thing our Habs organization never fails to do is put on a good show replete with history and class.

Yvon Cournoyer – a former Captain – was seen on the huge Jumbo-tron, holding a torch (this year’s battle cry for our Habs is “Raise The Torch” – and for those who are unfamiliar with why, our dressing room has the following line from the poem “In Flanders Field”:

To you from failing hands we throw
The torch; be yours to hold it high.

The torch has come to symbolize our pride and our history, brought out every playoff game to “light” the animated flames projected on the ice. Very effective and very dramatic.

So there was Captain Cournoyer – and to our delight, he was walking down the section adjacent to ours – so close to a legend!

Next came another Habs legend: Henri Richard. He held a torch and descended his section across the arena. And Vinnie Damphousse. And the Moment of the Night: Captain Jean Béliveau holding a torch at ice level. Jean Béliveau suffered a 2nd stroke last Spring, and has made a beautiful recovery from this one as well. Mr. Béliveau is more than a legend – he is a true Icon of our hockey team, and our city. When he made his appearance, an already-excited crowd erupted in a minutes-long standing ovation. It was hard to keep tears of emotion back. This man is a true miracle. His presence in the arena elicits reverence from those in attendance, young and old. And he is known for his warmth, his friendliness, and his appreciation of all this city’s fans.

For a fanbase that had been encouraged to boycott hockey, the place was rocking. The noise level went beyond anything I had experienced there before, and by the time every player was on the ice, my throat was raw from cheering my team. My kids were starry-eyed. They are  older teens, but their demeanors are candid, upbeat, and spontaneous. I leaned over to my younger son and said, “Jean Béliveau is our miracle…God bless him.” (we are not religious but there is a deep spirituality this man evokes in me) My son smiled and nodded in agreement, unable to take his eyes off this icon we were watching. It was a moment shared that constituted a highlight of my evening.

Okay, the game. It wasn’t great. And let me start by saying I am probably the world’s biggest Habs apologist. I can’t say anything negative about my team. Even if they’ve earned it. I just can’t. And I get offended and rabidly defensive when other people do – even if they are doing their job and analyzing a game.

But our guys weren’t there. They were disorganized, and it was frustrating, and nerve-wracking. And what made it worse were the Maple Leafs fans in the row ahead of me…obnoxious, loud, drunk…and celebrating the 2 goals their team scored in the first period.

Granted, we got penalties and that didn’t help. It didn’t help that one of the powerplay goals scored by the Leafs was on a bogus call on Pleky (which turned out to be the deciding goal – pretty much as prophesied by Dave Stubbs).

Granted, we were missing passes, not taking shots, and effectively held off from generating any offense. When Captain Gionta scored our only goal with 6 minutes left in the game, I pretty much lost my voice, screaming my excitement, loving how peeved the Leafs boys were in front of me, and high-fiving perfect strangers in solidarity. It energized us even if it would be the only triumphant moment of the game.

But you know what? It felt awesome to be back. The electricity was ramped up, the feeling of just being a part of this fan base and most of all, sharing it with my sons. I feel lucky that they never expressed a “can we just go alone or with our friends?” (they both had friends who were there in groups) but that they didn’t mind being out en famille. These are the precious moments I know I will cherish for a lifetime, and the moments I wanted to create for them from the time they were born.

Sure, it hurts to lose. It hurts to lose against the Leafs. And it wasn’t the way opening night should have felt at the end of the evening. But it was one game. We’ll get it back together and we’ll have what I believe to be a much better season than last year. And I don’t believe the fans who were there walked away completely disgruntled. One of the things about any sport is that teams win and teams lose. There HAD to be a winner tonight and it wasn’t our turn. There will be victories this season. I’m sure of it.

However, it wasn’t a total loss, not for me.

From a personal standpoint, last night was a wonderful evening. Riding home on the subway, watching my kids, I felt an overwhelming pride in them, and a deep gratitude that they still enjoy spending time with me. When we’re home, everyone’s spread out. There are computers and consoles and devices with which to communicate and commune, and that’s normal. We still enjoy together time, but it isn’t as concentrated as it is when we go out together. And last night, it occurred to me that while yes, attending a Habs game is a huge highlight for me (and for my kids), it is the memories created that are the underscoring reward in this type of outing.

So while I’m pretty bummed out that my team didn’t win, I had a hugely successful evening that will be repeated next time I can get tickets to a game.

Because in the end, it’s about more than the win.

(and because hockey is back, and our mantra is back, allow me to add:)

1 thought on “Sometimes It’s About More Than The Win”