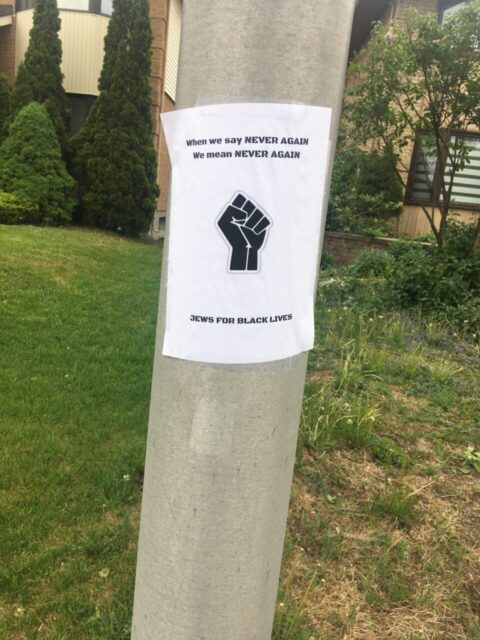 This won’t be a popular piece with those who will likely call me out on it, and use every name in the book for me where none applies. But I wouldn’t be me if I didn’t write it. So here goes.

As I walked my dog yesterday morning, I saw this sign on a lamp post. Today I saw more of them.

I am going to go the unpopular route: I don’t hold with this message.

Let me explain by first stating how proud I am to be Jewish. I am an unapologetic Zionist, and stand up for Israel, Jews, Jewish causes, and people every chance I get.

But I do not stand up ONLY for my people and my heritage; I stand up when there are injustices, prejudices, attacks on all people because of their color, religion, nationality, or any other “identifier.”

First, because Jews are (or should be) for ALL people. Yet, when there are attacks against other groups, I don’t see these signs popping up in neighborhoods.

Jews are the first to respond when there is a need. In Israel, even the people of Gaza – many of whom call for the death of Israelis and obliteration of Israel – are treated equally when there is a humanitarian or medical need. When there are wars (as there are, too often, in that region), the Israeli military sets up field hospitals to treat citizens of Israel, Gaza, Syria, and so on.

As Jews who have been through not decades, but millennia of persecution for our religion, we know that reaching out to others who are victimized by hate-filled attackers is what we do. Jews believe in the power of the mitzvah – good deeds that require no reciprocity, and in the concept of tikkun olam – acts of kindness performed to perfect or repair the world. Kindness is our hallmark because when we have been in need, it has been what’s saved us.

Look up Righteous Gentile (also known as Righteous Among The Nations) – the non-Jews during the Holocaust who risked their own lives, sometimes lost their lives, in order to save even one Jew from Nazi murderers.

These selfless heroes are memorialized at Yad Vashem in Israel and if you are ever privileged enough to visit, walk the Avenue of the Righteous Among The Nations. Visit the Garden of the Righteous. It will never leave you.

So we know what it is like to be persecuted for what, not who we are. And we know that to give back, and to show our support is key to tikkun olam.

But when Jews are attacked, we don’t see that same kind of outpouring. Yes, there are some. There are televised tributes, there are some newscasts, but social media users don’t devote days on end to speaking out on our behalf.

There was no “Jewish Lives Matter” hashtag when the Tree of Life synagogue was attacked, or when Poway Chabad was the scene of antisemitic murder, or when Josef Neumann was killed by an antisemite with a machete in Monsey, in December.

Where was the #JusticeFor JosefNeumann on social media? Why didn’t we see crowds of protesters – peaceful, of course – with signs and a demand that things get better?

There are daily attacks of antisemitism in New York. A Montreal synagogue was horrifically desecrated while it lay dormant during the COVID shutdown. One of the worst antisemitic attacks in Canada in years.

Hate crimes against Jews have numbered over 2000 (2,207 in 2019 – that is about six per day) in Canada, for the fourth year in a row. More than against every other demographic. No outcry other than local.

So I take exception to the notion that somehow, as Jews, we have the obligation to make signs and shows of support when an innocent black man is killed by an abusive policeman in Minnesota. We do it as people. Not as Jews, or Christians, Muslims, Buddhists, or atheists. We do it because we are all part of the human race.

No signs went up last week when the synagogue was discovered in shambles. In fact, this is the first such sign I have ever seen posted in my neighborhood (where, some years back, a swastika was drawn on my front steps with the sidewalk chalk my children had left out – chalk which immediately got discarded, I might add).

Who are the Jews in my neighborhood who have felt it necessary to post these signs? To take it upon themselves to speak for our entire community? Why have they never spoken up in this way when antisemitic acts of vandalism, violence, and murder have happened in the USA even just last year?

Why did no signs go up when Muslim women wearing hijabs were harassed on Montreal streets last year? Did Jews not support the Muslim community in this spate of hate crimes? (We did – at least, I did, and many others I know too)

But the main reason this sign bothers me is the use of “Never Again.”

That phrase has been co-opted for a few reasons in recent years, by people too young or ignorant to know its origins. It was used by prisoners at Buchenwald death camp, and is used almost exclusively to refer to the Holocaust. Rabbi Meir Kahane used it as a call to arms; not simply that the Holocaust must never happen again (because we’ve seen other genocides and we know it continues to happen) but that it justifies the use of force to prevent the kind of large-scale murder seen in World War II.

To equate it with any cause other than the one it denotes is wrong.

That’s right, I said it.

There is no genocide against black people in the USA. Or Canada.

There was a black president.

A black woman who started as a talk show host is one of America’s – and the world’s – richest women.

Black people sit at all levels of government, are given high-level positions in all fields, and are only discriminated against by racists. Not entire populations.

Thankfully, we aren’t seeing a need to invoke “Never Again” in solidarity with the black community.

So to use this phrase to show support is not only a logical fallacy, and a factual inaccuracy, it is a cultural dishonoring of the six million Holocaust victims, countless survivors, and families of Holocaust survivors.

And let’s face it: just as there have been other genocides since the Holocaust, and continued antisemitism, anti-Muslim, anti-black, and all other prejudices displayed across the world, we know there will be more killings of innocent people. Whatever their race, religion, culture, or nationality, there will be other killings.

I have no problem being vocal – loudly so – when there is an evil act committed against any innocent.

But I don’t change my behavior, or my anger, dependent on the color or religion of the victim. My sense of justice is not selective.

It isn’t so with others. There is some ingrained notion that we have to single out one community when injustices are perpetrated against a member of that community.

But we all know it isn’t just any community. And while I do stand with the black community in abject outrage against what happened to George Floyd, I am dismayed by the scale on which the outrage has manifested.

That is for another piece. Disproportionate response.

So I will end this one here, by saying that Jews stand with ALL victims.

Once, just once, I would like to see other communities, and those immersed in justifying riots in the name of Mr. Floyd, do the same for us.