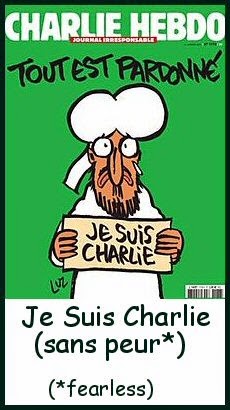 I have not weighed in on the Charlie Hebdo, Hyper-Cacher attacks, or on subsequent topics that have arisen as a result.

I have stayed silent – and part of that is because I have learned, through experience, that those who speak up – those who do not agree with the populist (aka leftist) view – get vilified.

Well, I’ve been vilified before. Many times. I’ve been accused, blocked, unfriended, and cyberbullied. I’m still being cyberbullied (from what I’ve been told) in groups I’ve left because my views didn’t mesh with theirs and toeing the line was necessary in order to be part of them.

If I don’t speak out, I am complicit. And that isn’t who I am. I’ve learned that speaking out will not always win me friends or influence people, but that’s not why I speak out. I do so because with the writing skills I possess, with the opinionated pieces I can produce, and with my feet squarely on the ground, I can have the voice I was given and which is my right to use, freely and without persecution. Well, without formal persecution. There are those who have persecuted me in social media venues. They were, and remain, inconsequential.

The people at Charlie Hebdo who died for their fearlessness knew the stakes. Those who blame them for any perceived line they might have crossed are just as bad as the government officials who coddle their assassins.  I salute their courage and their commitment to their opinions. There are many who stay silent out of fear the same will happen to them. That’s their choice.

But I have a voice, and much to say. And have decided to break my silence in honor of those who died for being cartoonists, or Jews, or soldiers or Westerners. And besides, when has any of you ever known me to stay silent?

Recently, after the State of the Union, a focus group on (hold your nose, liberals!) Fox News was given the microphone to state their impressions. One topic that arose was the administration’s abject refusal to call it “Islamic Extremism” or “Radicalized Islam”.

Those who identified as conservative were very vocal in their condemnation of the administration. The new, verbose term, uttered almost verbatim by every single staffer, is “individuals who commit violence based on their warped view of Islam.” Because of course, there are other extremists (though I’ve yet to see Jewish extremists yelling  “Baruch Hashem” {“thank G-d”} as they assassinate those who utter anti-Semitic rhetoric – and Charlie Hebdo has its fair share of Jewish caricatures).

One woman in the focus group, an Obama voter, steadfast in her support, stated, “There’s so much going on in the world, why are we so worried about the semantics? That’s all it is, semantics.”

That’s the moment at which I decided to get up and work on this piece.

It may seem like semantics but it is a very real representative of the bigger problem with this administration and those who follow its ideology. And the problem is threefold:

Barack Obama has stated, time and time again, how he will not allow for the denigration of the Muslim world. His words, in 2012: “The future must not belong to those who slander the prophet of Islam.” Those words have been heard by those who take offense at satire, offhand remarks or perceived slights.

I use the term “take offense” in italics because it is, indeed, a choice to take offense. And when the president of the United States makes a statement that the future does not belong to those who have been perceived to have slandered Islam, you can be sure the result will be an immediate death plot afoot.

Why are people living in fear? Because Islam is the only religion which punishes apostasy by death. Catholics, Jews, Protestants, Mormons, Buddhists – they choose to convert to other religions or to simply stop practicing altogether, without consequence.  And with such a violent reaction against Muslims who choose another faith, imagine the backlash against anyone who dares speak against Islam?

We live in times where words can be troublesome. Being in the field I am, I know that as strongly as anyone. But we also live in times where political correctness run amok has overtaken any freedom of speech rights. One absurd example is the use of peanut butter sandwiches as a racist slur. I kid you not. Here’s the story.

So, the semantics problem speaks to the fear of offending those who would act violently in response. Living in fear is what the government would prefer to do instead of standing up against intimidation.

Refusal to name the reality

The Obama government refuses to face reality. Radical Islam is NOT on the run as he stated over and over in order to win the 2012 election. They’ve grown out of control in the Middle East. They’ve hit Paris, Australia, and my home here in Canada. They’re going to hit again. They’ve got every “infidel” country in their sights and they won’t stop.

But if you listened to the State of the Union, you would think extremism is contained. Because this president believes that if you don’t talk about it, it doesn’t exist. Those of us living in the real world know that it is not only a very real problem, it is quickly turning catastrophic.

This is what the Obama administration does best. Whether it’s to create them, change them à la Benghazi, or obstinately stick to them, reality has no basis as long as the words come out right.

Right back to semantics. Saying something – or not saying it – does not make it true. Using the words that accurately depict any situation not only gives it credence, it shows strength.

But avoiding reality, avoiding words out of some misguided sense of loyalty to terrorists doesn’t sit well with me.

First, it weakens the United States of America. It makes the USA look afraid, cowed, intimidated. The superpower is subdued. And that leaves the USA vulnerable. It is dangerous.

Second, it is dishonest. It’s the equivalent of sitting in the middle of a crowded room with one’s hands over one’s eyes, chanting, “You can’t see me!”

Third, it insults the intelligence of every single person who knows the facts. That includes Americans, Canadians, Israelis, Europeans, anyone who knows that changing the words doesn’t change the reality.

Dancing around the truth for political purposes is not leadership. It is deception. (Don’t get me started on that – totally different blog piece brewing)

Playing with semantics for political purposes or out of fear is a feeble attempt to solve a problem without a resolution. This situation will be raging out of control long after Barack Hussein Obama leaves office (726 days!). All he is doing, with his word games and hidey-hands is kicking the can down the road for the next person to deal with when s/he takes office.

Let us pray that the next president is strong enough to stand up against radical Islam, look it square in the face and state, unequivocally, “You can’t scare us off. We know your name.