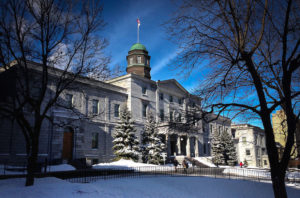 McGill University Student Rep, Igor Sadikov, has faced no official consequences for his tweet of February 6, 2017, in which he urged his followers to “punch a Zionist today.”

Instead, he has “apologized”, which has fallen short, and endorsed an offer to “punch one for you if your position does not allow you to,” 7 hours after his ersatz “apology.”

Clearly, his message of violent hate has already done some damage, and I consider it only a stroke of luck that we have not yet heard of any violent incidents that are directly related to his call to action.

But it can only be a matter of time.

In Sadikov’s “apology”, he invoked his own Jewish heritage. Vivian Bercovici, the former Canadian ambassador to Israel, wrote the following on Facebook:

I echo her thoughts – and have, personally, tweeted the Prime Minister to ask him to disavow these remarks.

Sadikov’s “Jewish heritage” – however he may define that – leads to an analogy that cannot be ignored: he is a kapo of 2017.

As I’ve stated often, I am adamant about comparisons to the Holocaust. I hold that era as a sacred time for our people, not to be used casually, so as not to dishonor the victims, survivors, and their families.

There are, however, some instances when analogies lend themselves well, and the comparative lines can be drawn.

I feel this is one of them.

Who were the kapos? They were Jews, during the Holocaust, who were put in charge of other prisoners. Kapos were assigned supervisory roles over prisoners on work detail.  Very often, they were seen as brutal counterparts to the SS, who assigned them.

They showed little mercy on their fellow Jews, they were bribed and bought, and generally known as Jews who would sell out fellow prisoners if it meant they might eat a little more, work a little less, or live a little longer.

It has been an ethical dilemma for decades, as to whether or not kapos could be branded as war criminals. After all, men and women put into the most dire conditions could not be blamed for committing desperate acts, no matter how devastating. Could they?

I cannot comment on the roots of evil, in human behavior. I wasn’t there. I cannot speak for kapos, or their victims.

There were more victims than not who did not turn to power in order to compete with their fellow prisoners. Were they stronger? Weaker? I cannot say, not with any expertise.

But the kapos turned against their fellow Jews, in ways that can only be described as horrific – and treasonous.

In covering this story, of Igor Sadikov, the comparison seems apt.

After all, he’s admitted to “Jewish heritage”, though we don’t know “how Jewish” he is (are both his parents Jews? Just his mother? His father? If his father is the only parent of Jewish heritage, he is linked but not considered Jewish, as the religion is passed on through maternal lineage).

For me, this makes him a self-hating Jew. Someone who does not uphold the values of Judaism, which recognizes and cherishes Israel as our spiritual homeland, and as the one true Jewish State. Someone who clearly has no problem invoking and advocating for violence against those of us who do consider ourselves to be Zionists.

Someone who – with one tweet – shows contempt for Jews, hatred in his heart, and incitement of antisemitism.

That McGill University is doing nothing about this is beyond the pale.