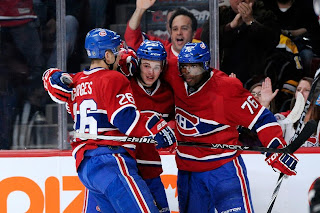 Aren’t sports supposed to be healthy? Tonight, it doesn’t feel that way.

My Habs just won a HUGE game against the Boston Goons Bruins. From the start of this game, migraine aside, I was not excited. I was nervous, I was tense, I was not feeling an enthusiasm but rather a dread. I don’t like that – hockey has become more than a passion for me, and I love those opening face-offs, I love the blank scoreboard filled with promise and I love the newly Zamboni’d ice that marks a fresh start for every game. But somehow, when this match-up occurs, I don’t feel that love. I just want it to be over. With the Habs chalking up another “W”.

The Bruins are known for hitting hard, dirty, and unchecked by refs. They’re known for forgetting about the scoreboard and running up minutes on the Penalty Board. (okay, there’s no penalty board but if there were, it would be theirs to own).*

(*in fact, there was a total of only 8 penalty minutes for both teams all game. Both teams recognized the need to play disciplined hockey)

We’ve had our run-ins with the Bruins – and my first introduction to the venomous rivalry was the March 8th, 2011 hit on Max Pacioretty. Not reliving that here, but it’s historic as regards my own foray into this crazy game. But our playoff battles with Boston have been flush with emotional moments and more deeply-carved hatred (I use that word because it is used so often in reference to these two teams).

I blogged about the rivalry for a blogging contest and won 2 seats in the reds to see this match-up. My words hold true in my blog – I can’t use “hatred” in its true sense because that word is saved for true situations. But it’s close. The Bruins incite those emotions because they are just so dangerous in their need to fight and to injure.

So I read all the lead-up statuses and tweets to this game: “Looking forward to an exciting game!” and “Can’t wait to renew the rivalry!” and I couldn’t share that anticipation. To me, the best experience in a Bruins-Habs match-up is the end of the game when the Habs have won. Does that make me a bad hockey fan? No, because I’m not like that with any other match-up (Toronto comes close but not like this).

Found out I wasn’t alone either – more than one of my Twitter friends expressed the same dread, the same uncomfortable tension and the same need for an end-of-game buzzer with the Habs victorious.

This was a game filled with tension. The Habs got 2 goals in the first 2 periods, only to lose the big lead with a Bruins goal in the 2nd. That’s when my tension went on high alert. A one-goal lead is not a lead to protect, nor is it ever a lead to be happy with, until that end buzzer. And with the Bruins getting new life on their goal, we were in trouble.

The guys played absolutely amazing hockey. Carey Price is a revelation with every game and was so incredibly awesome tonight as to be supernatural (Carey haters will hate but they are as inconsequential to me as Bruins fans). But with a one-goal lead for most of the game (and as it turns out, till the end of the game), it was a ridiculously physical game – for me!

Seriously, are heart palpitations, sweaty palms, knotted stomach, increased headache, and weak knees a normal state for a person my age? Only when the Habs play Boston.

And with half the period to go in the 3rd, it was too early for me to take my regular standing spot in front of the television, but there I was, standing for a couple of minutes as my nerves took over and I couldn’t sit at the keyboard without nervous energy taking over.

When Lars Eller took a holding penalty at minute 19:04 and the Bruins pulled their goalie for a 6-on-4 advantage, I went into full knee tremors. Is that normal? Uhhhh…see 2 paragraphs above.

But the Habs held on for the win.

And when the time ran out on the most tense minute ever, I screamed and added sore throat to my list of hockey-induced ailments.