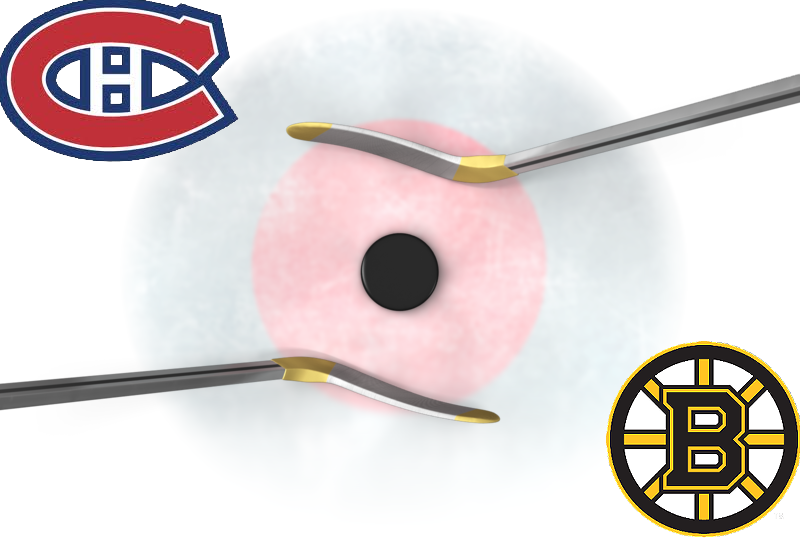 The Habs won their first game in Round 2 against lifelong rivals, the Boston Bruins last night. The game went to double overtime and the winning rocket came from PK Subban, who had also opened scoring for the Habs in the first period.

Boston and Montreal have been rival teams for as long as they’ve played hockey. This is the 34th time they meet in post-season and as time has passed, there are incidents that will always stand out in the minds of fans – some good, some not. The comeback wins in regular season, in playoffs, and in Stanley Cup finals. The collapses, the losses, the fights. These are all part of the tapestry that is woven with Gold and Black, Bleu-Blanc-Rouge. It’s in our blood, as fans of the Habs, to loathe the Boston Bruins. You’ve heard of the term “love to hate”? That’s our rivalry with Boston.

In 2011, The Hit heard round the (hockey) world occurred on home ice as Max Pacioretty was driven into the stanchion by Bruins’ Captain Zdeno Chara. This game followed a victory by the Habs where Pacioretty scored the winner, and as he skated to celebrate with teammates, pushed Chara out of the way. That incident carried forward to the next game in which Chara went after Pacioretty. There is much debate about intent, and depending on who you talk to, Chara meant to harm, he didn’t mean to harm, he knew what he was doing, or it was a “hockey play”. What is indisputable, though is the aftermath: The Hit broke Pacioretty’s vertebra, and concussed him; he was stretchered off the ice in a hushed, stunned Bell Centre and those watching on television took to social media to express shock, fear, and concern for Patches as well as for the game of hockey in general. The game went on, but the mood was somber. The Habs still went onto a definitive win (4-1) but this Hit defined what was to follow in the NHL as regards headshots and safety.

It also set a new point of contention for fans of both teams. Montrealers were infuriated; Chara received only a game misconduct and was not given any supplemental discipline. Some Montrealers even called 911 to report it as a crime (police were compelled by law to investigate it and this became a source of ridicule by Bruins fans – rightly so, might I add).

Rivalry became revenge. It woke us to the dangers of the game right here at home. And it fueled the face-offs between these two teams even more.

The Habs have emerged victorious in 24 of the 33 completed playoff series against Boston in our history. Recently, however, we lost to them in Round 1 of the 2011 post-season, and 2009.

This year is a year in which the Canadiens have been very strong all season. Despite some key injuries, we entered the playoffs fairly healthy, swept Tampa Bay in Round 1, and are playing “our” game: fast skating, excellent defense, and exceptional goaltending.

The optimism going into Round 2 is high. So last night, when Game 1 began, energy levels were elevated.

P.K. Subban is a star player for the Montreal Canadiens. He is known to take risks, but they pay off much of the time, as is evidenced by his strong showing in the statistics columns. But he is hated in Boston, he is the one fans boo when the puck is on his stick. That’s okay – we all have those.

However last night, a trend that has become more prevalent in these match-ups grew to a level heretofore unseen: racism reared its head again, and flooded social media.

P.K. has dealt with racism before. We have seen it online on a regular basis (this week’s Donald Sterling issue has dominated headlines even in non-sports circles). But last night, on Twitter, the vitriol against P.K. for his skin color was truly shocking. I will not repeat or provide screenshots of what was said. There is no need to dignify, sensationalize or perpetuate the kinds of remarks we saw.

It got so bad that the “N” word was trending on Twitter (trending topics are words, names, topics that are used so often the software algorithm picks it up and registers it as “popular” enough to notice). Despite the beautiful double-overtime winner and the triumph over a major rival, the headlines were not about the game but about the ugliness that ensued.

Discouraged, but not downtrodden, Habs fans jumped to P.K.’s defense, condemning the Boston fans who made these statements. In fact, the irony of it is not only that Jarome Iginla (a strong player for the Bruins) is of mixed race, but that P.K.’s own brother, Malcolm, has been drafted by the Bruins and is playing goaltender for their farm team. This has been pointed out many times, in comments on social media as well as in comments to stories posted about yesterday online.

And while it is despicable to see, and know these people exist, I am heartened by two statements issued this afternoon. One was made by Bruins president, Cam Neely:

“The racist, classless views expressed by an ignorant group of individuals following Thursday’s game via digital media are in no way a reflection of anyone associated with the Bruins organization.”

The other comes from Boston Mayor Marty Walsh:

“This is a disgrace. These racist comments are not reflective of Boston, and are not reflective of Bruins fans. I’ve said before that the best hockey in the world happens when the Bruins and Canadiens play each other, and there is no room for this kind of ignorance here. Yesterday Mayor Coderre and I made a friendly wager on the series, and we closed the conversation by wishing each other the best. I would hope that fans on both sides would follow this example.”

Even players at today’s practice condemned the racism – of all people, Zdeno Chara and Brad Marchand, coming out with strongly worded comments that illustrate our “love to hate” targets have a strong sense of decency after all.

“The racist, classless views expressed by an ignorant group of individuals following Thursday’s game via digital media are in no way a reflection of anyone associated with the Bruins organization,”

There will always be those on social media, hiding behind the wall of anonymity and the shield of false bravado, those who will make comments based on nothing but insecurity and deeply held misguided beliefs. We must be careful not to paint others with the same broad brush. I know that not all Bruins fans think the same way and this is evidenced by the influx of Bruins fans denouncing the racism, expressing shame for those who hate in the name of their team, and embarrassment for their city.  I know that most Bruins fans feel the way Habs fans do: it’s in our blood to despise the other team, trash talk them within the confines of sports-related rhetoric, and be energized by wins, or more determined by losses to come back in the next match and emerge victorious.

In fact, I’ve seen Bruins and Habs fans actually unite in solidarity against prejudice today. And isn’t that what sports are all about? A common interest, friendly competition, strong loyalties and always-increased anticipation for the next date to deepen the head-butting of rematch.

Sports are the microcosm of life in so many ways. Today, the decent side of hockey fans has emerged and is more heartening to see than the discouragement was to experience.

Oh, and by the way, Boston – P.K. loves the booing; in a recent interview for the National Post, he stated, “If they’re trying to find ways to get me off my game, that means I’m doing something right.”

It should be a great series between these two teams. But one thing will remain true: the rivalry is alive and well, and true fans can count on their teams to reinforce, and add to, this historic feud for a long time to come.