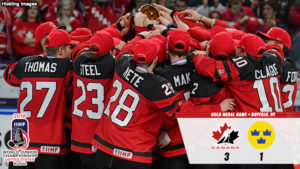 The World Juniors Hockey Championship just wrapped up in Buffalo last night, with a perfect finish to the game (if you’re a fan of the Canadian team – obviously, I am).

The tournament is an annual holiday favorite. Ten countries send their best under-20 players to the host country to play first in round-robin preliminaries for standings, and then quarter-finals, semis, and the Gold Medal game.

I’ve only watched the Juniors over the past 8 years, and it’s exciting hockey. The obvious leaders emerge as the round-robin games take place, and by the time the quarter-final games are played, the tension has mounted.

8 teams play quarterfinals, with 4 emerging to advance to the next round. Those 4 compete in semifinals, with the 2 winners advancing to the Gold Medal game, while the losing teams play each other for Bronze.

I have no trouble admitting that Canada is a strong team every year, and the 17 gold medals won by my country are testament to that (the next “most golds won” number is 4 – shared by USA, Russia, and Finland). Sure, we’ve experienced crushing defeats (2011 collapse comes to mind), and heartwrenching “near-wins” (last year’s shootout loss to the USA). But that’s hockey.

One of the reasons these games are so intriguing is that many of the participants have already been drafted by NHL teams. They won’t play at the NHL level for some time, but they’re “spoken for”; this makes for fun viewing, because even if a player is not on our national team, he may well be a prospect for our NHL team.

Of course, that makes it even more fascinating, as we cheer for players on our national team even knowing they have been spoken for by a rival in the NHL.

This year, the 2018 WJHC, the Canadian team lost only one game in the tournament: the outdoor game played against the USA (the USA won Gold last year, in a shootout – but that’s a whole other article).

The outdoor games are never predictable because ice conditions, sun, and other factors not found in a climate-controlled arena are at play.

Still, the game was anyone’s to win, and the USA took it.

But Canada won decisively in quarterfinals, beating the Swiss team 8-2. In the semifinals, they faced the Czech Republic, handily winning 7-2.

In the other semifinal games, the USA was beaten by Sweden 4-2 (in a stellar performance by the Swedish team, which scored 2 short-handed goals on the same penalty kill, 8 seconds apart).

This saw Canada facing Sweden for the gold medal, and the USA playing the Czechs for the bronze.

The game between Sweden and Canada was not expected to be a blowout, nor was it going to be easy for either team – but both teams were ready.

It remained scoreless in the first, and Canada got the first goal in the 2nd period. The Swedes, in a repeat of their short-handed goal performance from Thursday, got on the board with another shorty, tying the game.

It was late in the 3rd period when Canada got a go-ahead goal with 1:40 remaining on the clock. The Swedes pulled their goaltender, but Canada sealed the deal with an empty-net goal. Still, the Swedes played the remaining minute with strength and aggressive hockey skills, showing why they had been such a challenger from the beginning.

Canada celebrated the victory among many Canadians (or fans of the team, in any case), who had packed the arena for this last game and were sending up a deafening roar of cheers.

When it came to the medal awards, the Swedes received their silvers. First up was the Captain, Lias Andersson. He was asked to take off his helmet, which he did. Instead of having it put around his neck, he put his hand out for the medal, but didn’t receive it until it was put around his neck.

What happened next shocked the hockey world and dominated social media: he immediately took off the medal, skated over to the glass, and tossed the medal into the crowd.

(A man caught it and put it on – this guy has now gone viral, especially as he removed the 2 USA jerseys he wore to reveal a Sweden jersey underneath; later, however, the medal was returned to Andersson – who, in an interview, stated he didn’t want it back)

What we witnessed became a source of controversy – which is puzzling to me. Why is anyone excusing the very rude, disrespectful, ungrateful behavior of a 19-year-old who has not only been drafted by the venerable New York Rangers, but who was captain of his Juniors team?

There’s no excuse for it. And yet, it became a true debate online.

People excused it because:

Here’s why I won’t excuse it:

Of course nobody wants to “settle” for silver. But if every team felt the way Andersson behaved, why come to a host country in the first place? Every player knows that he stands a chance of going home empty-handed, and yet, they still play with heart.

So why the ugly display of immaturity in the final loss?

When my younger son was in PeeWee hockey (he was 11), his team went to the finals of the local tournament. They were “The Little Team That Could”, the team that had the smallest players, the most novices – my son included – and had the fewest “stars”. They won the semi-finals in an 8-round shootout that showed them pushing as hard as they could. In fact, after they scored the winning goal, a parent from the other team – a team from a South Shore town – turned to me and congratulated me, with the utmost sincerity,  for our team’s performance.

The finals were different – they faced a team that was populated with large kids, experienced kids, and that had an element on the team which can only be described as arrogance.

After a goal scored by that team, their player skated past our side of the bleachers, and gloated visibly, to our bench and the stands. It was something I’d never seen before, and it was that much harder when our team lost to them.

We had an impromptu party set up – win or lose – and the boys were dejected but they were doing better than I was. I’m an emotional person and I think I was more prone to tears in this loss than the kids were.

But I was amazed when a friend of my son’s – and then my son that night – told me that they didn’t like losing, but they didn’t mind it because they’d played their best. What they were bothered by, however, was the arrogance of the team that won; both boys said to me, “they were poor winners and that’s what made it hard to lose to them.”

Age 11, and they were already showing the kind of dignity we see in leaders.

I have never watched the Juniors without a pang in my heart and a lump in my throat for the team that loses; being younger, they wear their emotions on their faces. The Swedes were, almost to a player, in tears, and comforted by their coaches as the Canadian players hugged center ice. It was incredibly hard to see – as a mother, and as a human.

But the “hold your head up high, you played a fantastic game” adage isn’t wrong. They have more to be proud of than not, especially the sportsmanship they showed in the game.

And yet, their captain’s display of immaturity negates that (to a point).

No, this isn’t something I will hold against Andersson, but he will be remembered for this, as it became A Story in the last moments of this event. Headlines alone attest to that. And, as they say, history will remember it.

I’m not alone, either – the general sentiment is that he will, eventually, come to regret that move.

And while I don’t like to brag, I will: last year, in a heartbreaking shootout loss to the USA, Team Canada was gracious and dignified.

In 2015, the Russian team lost (to Canada) and a player threw his stick into the crowd, hitting a fan. In this story, there are photos and video. It should be noted that Ziat Paigin has not been drafted by an NHL team. Whether or not it’s related is unknown, but what NHL team would take a chance giving a prized roster spot to a hothead who cannot lose with dignity?

Andersson is drafted. That won’t change. But if his behavior doesn’t change either, he won’t go far. Sports are not, beyond the scoreboard, a black-and-white/win-or lose. Even if the scoreboard is cut-and-dried, the humanity of any sports team is very much at play. If Andersson shows poor sportsmanship at the NHL level, he will become that proverbial toxin “in the room” and his teammates will not take kindly to it – nor will management.

As in life, there is no smooth sailing in sports. When I first learned cross-country skiing, the instructor taught us how to fall, on that first day, in that first lesson. Being younger, that made no sense to me. He said, “if you learn to fall, you can learn to get up.”

Every athlete should keep that in mind. It’s a life lesson, and transcends the sport. Anyone defending the actions of Lias Andersson should take stock of how they lose the everyday battles in their lives.

I’ll end with a quote that was tweeted by an unrelated account just as the evening wore down:

If you wish to be out front, then act as if you were behind. – Lao Tzu