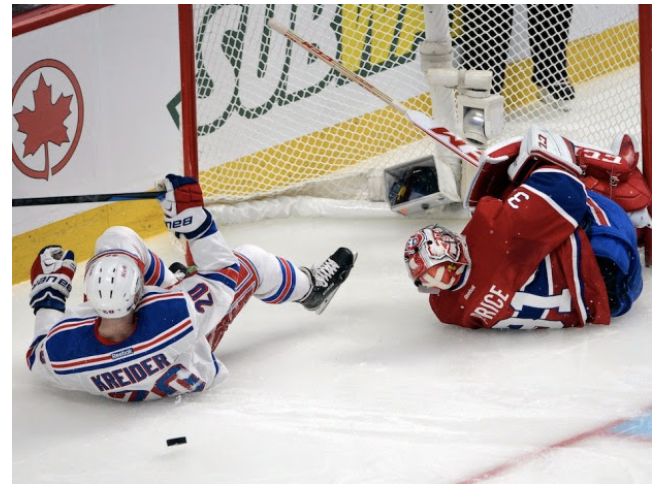 And so it starts. The naysayers. The doomsdayers. The pessimists. The bandwagon is lighter already.

Carey Price, crashed in his own net by NYR’s Chris Kreider, is out for the rest of the series with what is obviously a lower-body injury. And Habs fans are despondent. Rightfully so.

From the start of this season, even from last year’s truncated season, we knew we had something special in our goalie. And Carey proved it in nets for the Habs, stopping the impossible and making it look natural; standing on his head to save pucks from going in. And doing it with a calm coolness that defied description.

“Keep Calm and Carey On” became a tee-shirt franchise. Memes all over social media. Descriptions of Carey Price as “in a zone so focused he isn’t even on the planet”, “ice water in his veins” and “the backbone of the Habs” were not quite hyperbole. He showed a confidence in his own abilities that has given his teammates, his coaching staff, the GM, the owner, and fans of the team an easy sigh of relief to know we have a superstar in nets.

Carey’s spectacular performance at the Olympics cemented his superstar status, elevating him to the world stage where he earned accolades from the likely as well as the unexpected kudos (from local news outlets worldwide which otherwise would not have taken notice of a Canadian goalie). Still, he remained humble, modest and turned the spotlight from himself to his teammates, as he continues to do in Montreal.

So when he was knocked to the ice in obvious pain on Saturday afternoon, all of Habs Nation gasped. Carey had struggled with tendonitis in his knee post-Sochi, and it was apparent when he grabbed his leg on Saturday afternoon that this could well have aggravated it. He lay on the ice and despite getting up, resuming play, the score that resulted is proof positive he played injured.

We got the News. It shook us to our core. We have come to understand that with Carey Price, if he can see it, he will stop it. The confidence has been complete. It stands to reason Habs fans are shaken by the news of his series-long absence.

A couple of things: First, Michel Therrien stated “for this series”. Not “for the rest of playoffs”, and in fact has stated that he hopes to see Carey back in playoffs. That, folks, is confidence in one’s team. Which brings me to my second point: the Team.

Yes, Carey is elite. Yes, he is a brick wall and makes stops that are spectacular. But he is one guy, and he stays at the one end, doing what he has been relied upon to do: stop their shots.

There are two other corps: the defense, and the forwards. As long as our defense keeps blocking shots (and many of our forwards do as well – see: Brendan Gallagher), as long as the forwards keep taking shots on net (and our D-men have too: see: PK Subban), and as long as we keep up 60 minutes of motivated play, taking the shots, and stopping the opponent, we have more than a good shot at eliminating the Rangers.

So, do we resort to hyperbole (“catastrophic!” “WORST NEWS EVER!”)? Do we jump off the bandwagon and declare this team done?

Or do we buck up, believe in this team, the character of every single player on the ice, and the motivation that more than ever, we must do whatever is needed to support our Habs and let them know their fan base is behind them, and behind whomever the coach has deemed capable enough to guard our net?

I don’t know about you, but I’m going for that last option. I am a true believer in my team, and it doesn’t stop with one injury, no matter how pricey the loss may feel.