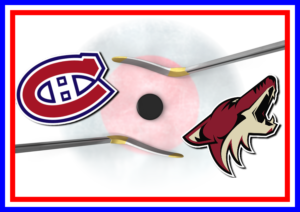 In a game filled with tension – one-goal game or tied for the whole 60 minutes, the Habs managed to stave off a tying goal and won 2-1 over the Yotes.

Alex Galchenyuk returned for the first time since he was traded to Arizona for Max Domi. The team paid tribute to him with a typical, classy Canadiens “merci” video, and it was clear he was touched by it. And though he managed to net a goal late in the third frame, it was reversed when Claude Julien challenged for offside.

Habs fans know those calls rarely go our way, but to our delight (and shock!), the referee announced that it was, in fact, offside, and there was no goal.

This marked my first time liveblogging a game. I had practiced over the week, but this one was the one that had to count. First, I settled on a style I liked (modeled after Mike Boone’s way of indicating period and time), and got into the flow of posting as I usually tweet.

There are a lot of features I have yet to discover in ScribbleLive, but I learned to pull in tweets and use them to illustrate the progression of the game, as well as the mood on Twitter – both Habs and Coyotes streams.

I thoroughly enjoyed doing this; it also, as I posted later in the game, kept me from my usual spot, wearing out the carpet in front of the television as the tension mounts. That’s when I usually try to push the puck with my hand (never works), or inch closer to the screen (55″ isn’t big enough when one is trying to help her team win), or just stand with my hands over my eyes – peeking through my fingers.

Being a (rabid) Habs fan has its drawbacks. Tension, too uptight to eat on game nights, emotional rollercoaster.

But it also has its benefits. I mean, I know my heart is healthy. And when the Habs win, it’s that much sweeter.

So here, without further ado, is my liveblogging assignment. It took me a while to apologize for the overabundance of exclamation marks – so I’m making up for it by apologizing now. I do tend to get….enthusiastic.