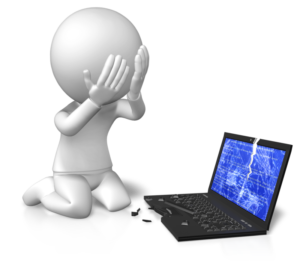 In the course syllabus, and description, Johannes describes the computer as “places and spaces”…and while I totally agreed with that even before the course, what happened to me this week proves it beyond the shadow of a doubt.

The laptop I bring to school is my portable desktop. Basically I don’t use any other computer – my kids use the desktop we have had for about 5 years, and we just acquired a 2nd desktop because with 2 kids (who, I might add, take after their mom and love the computer), it is necessary to have 2 computers. So I knew the laptop had to be the only place I could truly call my electronic home. When my old laptop (only 18 months old at the time) flickered and went black, I negotiated (hard!) with the store to uphold their extended warranty plan and replace it with market-value electronics. And when this computer came into my life it was only a couple of weeks on the market. I knew it was THE computer to have – kick-butt graphics card, 17” screen, huge hard drive, everything I needed. And I knew I’d make good use of it.

Wednesday night. Working on my project, and my reflection paper, and polishing up some logs and stuff for class. The laptop froze (it doesn’t do that, not often – it has HT so it has been very reliable) and I pressed the “reset” button before going into the den to help my son with a problem he was having.

When I returned to the kitchen (sort of where I station myself when the kids are home and busy), the laptop was still rebooting. I watched and waited, but when it went to a blue screen and restarted again, I knew something was wrong. I closed it off completely, waited 5 minutes, and started it again. Same thing. Beginning to feel a sense of dread but not giving into it, I started it yet again. Played with trying to start it in Safe Mode, Last Good Configuration, all the offered choices. Nothing.

When I realized my computer was not going to work, I felt the panic rise. But when I say panic – sheepish to admit this – I mean panic. Tears. My son came in to see what was wrong and I told him I thought my computer had crashed. I tried again, to no avail. This time, it was full panic.

I knew the stuff was still on the computer, and I’d just have to get someone to fix it. But that wasn’t a comfort – I needed everything NOW..in fact, YESTERDAY…and frankly, I don’t trust just anyone with my computer. When my son asked why I was so upset, through tears I proclaimed (and yes, this is what I said – been reliving it): “my whole LIFE is on there!”

Yes, I had 3 semesters’ worth of school stuff on the computer. Yes I had a project in progress, articles saved up (though printed as well) for my reflection paper, all my settings and passwords and everything else…but there were personal things on here too. Not just pictures of my kids, recordings of their voices…but creative writing I have stored up…artwork – both artwork I have completed, artwork in progress, and digital materials for my graphics. There are emails saved on my laptop that were transferred from my other laptop which were transferred from the 5-year-old desktop. In essence, 5 years’ worth of emails. 5 years’ worth of memories, the trajectory of the past 5 years in which so much has happened in my life…truly important cherished sentimental material. And I could only feel the dread that it might be gone.

A friend comforted me, telling me that the data was still in the box, I just needed the proper key to access it. I was going to go to sleep and awaken to call the Geek Squad in the morning. But there was no sleeping for me that night…I was driven to at least TRY to find answers. So at midnight, I was on the desktop in the den, looking up the exact problem. I had managed to freeze the BSOD to where the error message was displayed. Unmountable_boot_stopped…and after searching for answers on bulletin boards, I found them. Seems this is not such an uncommon problem when the boot sequence cannot be followed. The solution was to repair Windows, using the recovery disk. Searched for it, and found it and came back to the den. By then, a friend of mine was on MSN and I told her what was happening.

She stayed with me while I went through the steps. I read many accounts of what to do and how to do it. I was very careful, because I did not want to – obviously – reinstall Windows. But after reading my manual, and all that I’d read even from MS’s site, I was ready. And I hit the “start” button on the recovery console.

It was the longest 39 minutes of my life. And I told my friend Deb, that if I lost everything, at least I was the responsible one, rather than having trusted my “baby” to someone less committed to it than I. I told her that I wanted the computer to work, and this would be my wake-up call. Would it be a hard call or a soft one? I was actually holding my breath those last few minutes. And as it went to restart, I thought I had lost everything. I posted, “Deb…it’s gone…” And she was SO sympathetic.

When the log-in screen began to show, I saw an icon in the top left-hand corner, for my wireless mouse (also a fingerprint reader) and thought, “that wouldn’t be there if everything were reset…”. When the log-in said, “lissa” and “loading personal settings”, the same heart-stopping thought came to mind. And when my wallpaper (never been so happy to see Rene Magritte’s work than just at that moment) and all my icons began to show up, I shouted aloud. Sheepish but triumphant, I reported to Deb that all was intact. I checked anyway – first thing was my email program. All folders were there and intact. I was limp with relief…

Of course, my cat thought I was totally nuts – especially when I proclaimed, “Spirit…I did this. I DID THIS!!!” and he opened one judgmental green eye and yawned at me. But it was so much more than recovering the data.

Okay not THAT much more *grins* after all, it was all the data that I had feared was lost. But it was such a strong sense of pride in my achievements and my own determination, as well. I felt a stronger positive self-efficacy, and suddenly it was “I CAN do whatever I set my mind to doing!”

But what lingers is how deeply felt was the positive despair at the prospect of losing all that I have on the hard drive. When I said, in panic, “my whole life is on there”…I don’t think I realized just how true those feelings are. Is it normal, or somehow obsessive to have so much, and attach so much meaning to mere electronic data? In discussing the feelings with a friend the next day, I knew that no, it wasn’t something out of the ordinary, though logically, deep down, those memories are not lost to me even if their electronic representatives were to be. It was a bit of the packrat in me, perhaps…but I am extremely relieved to have the stuff back – and am backing up even at this writing.

That, perhaps, is the greatest lesson of all: back up the hard drive on a regular basis!!!

The fact that I was held together, emotionally, by a woman who has become my FRIEND…someone I have not yet met (but will) and who truly “speaks my language”…someone who was online the same time I was, and who was instrumental in keeping me semi-sane…goes, again, to show how the internet and its many facets have played an integral part in my social life…

Of course, the prospect of going without my laptop for another 60 days (the time in which the store “tries” to find a fix for an irreparable machine) was not a tasty one. I went through 2 months with the old laptop not functioning as it should (the display was gone, though the computer was able to be hooked into an external monitor so I could use it through my first semester in the program)…it was inconvenient, at the very least, and frustrating at the very most. I’ve become very used to the mobility of my wireless internet-able laptop. And I have plans this holiday to be away for 3 nights with my family, but with wireless at the hotel, and nothing to do but veg out and enjoy doing nothing, my laptop is an integral part of those plans (as it has been for the past 2 holidays with the same provisions).

More than ever, I am aware of how great a part in my life the laptop, its mobility and its connectivity…I’m not ready to give up the luxury. And it took an all-nighter to panic, then research, and fix a problem that would have had me without the computer. Am I addicted? Some might say yes. But does this not prove just how much we DO rely on our electronic social space. And from all the literature I’ve read through this semester, I am not alone…

And they said the Internet would never last….!

1 thought on “Proving the Thrust of Social Computing”