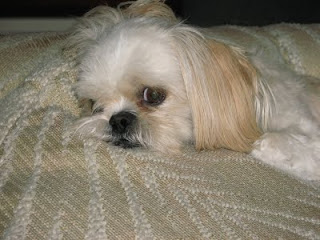 The first time I blogged about Theo’s back trouble was when it began, in February. He was fine till May, when I noticed he was just not himself. It was a Friday night. I got an appointment Saturday morning, started him on meds, as the doctor believed it was the same problem. He was okay for a couple of days, but that Monday, was in a lot of pain; I rushed him in for the emergency appointment hours and this time, they gave him tramodol for pain as well as extending the steroids for inflammation. He recovered but I sat in dread of August. It had been 3 months between flare-ups and somehow, I thought August would bring another.

Lo and behold. Tuesday afternoon I noticed he was off…can’t really describe it any other way. I walked him, which is never an indication as he is his old self most of the time when this flares up. Called the vet and got an appointment an hour later. When the doctor palpated Theo’s spine, the dog tensed up just for a moment and the doctor nodded. He said “Yup, same as last time, same location but you caught it early – when did you first notice symptoms?” I said, “an hour ago, but he wasn’t showing symptoms – just wasn’t himself, I had a feeling.” The doctor was actually quite impressed with the depth of the connection Theo and I share. I told him that my dog has a special something and he told me he could tell from the first time we’d been in. That made me smile.

He doesn’t believe this is anything serious beyond what it is – an occasional flare-up, inflammation due to discal fluid leaking from one of the vertebrae. He said that because I can see it early, and because Theo responds well to meds, this is highly controllable and no need for even considering surgery. That was reassuring but in the meantime, my baby dog needs painkillers and anti-inflammatory meds, and is not his usual jumpy self. He is an amazing dog, though, his demeanor is so docile that he didn’t even give the vet an argument when he was in pain. I’ll take my cues from him, but we’re babying Theo till this runs its course. Carrying him up and down stairs, not allowing him to jump onto or off the sofa, and watching him closely for any changes. Keep him in your thoughts!

2 thoughts on “Theo’s back – revisited”