The Habs. People outside of the city, the circle, the sport, or the culture don’t know what that means. It is short for “Les Habitants” – the informal nickname given to early settlers of New France (in the 1800s) and while our hockey team has been known, for over 100 years, as the Montreal Canadiens, they are also known as The Habs. This seems to have been the result of an offhand, and inaccurate, statement made by Tex Rickard in 1924. The then-owner of Madison Square Garden, explained the Canadiens logo incorrectly. The logo looks like this:

Rickard said the “H” stood for “Habitants”. In fact, the “H” stands for “Hockey” and the logo above has always meant “Club de Hockey Canadien”.

But the nickname stuck. And we are known, lovingly, famously, and forevermore, as The Habs.

It’s post-season now. The playoffs. The time some people call “the real season”. The slate is wiped clean. The 16 teams that have made this special club are no longer about points. They’re about wins. It takes 4 wins per series. And the stats are as reset as the fresh sheet of ice that bears the team’s logo and the the Stanley Cup painted into the ice of those lucky 16 arenas in these playoffs. 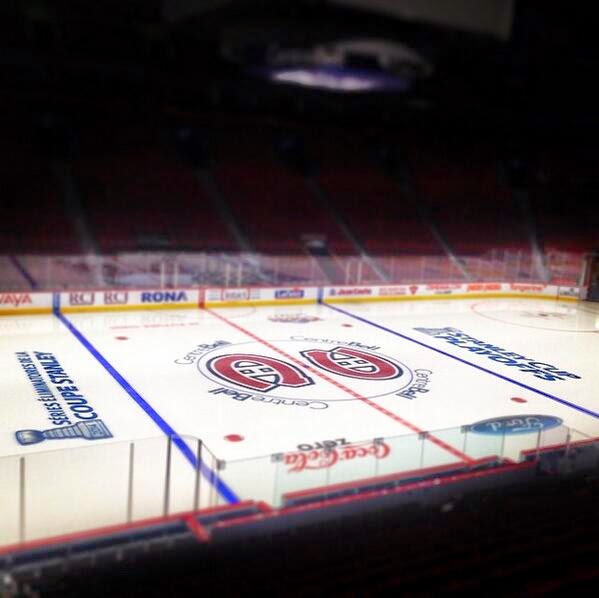 This is the 80th time in their history that the Habs are in playoff mode. Montreal has missed playoffs only once (2012) since I became a “true” fan (see “Habs Loyalty”). I became a fan due to a highly successful playoff run in 2010. And I’m known to be blindly loyal to my team. Do I see their faults? Sure. Do I fall off the bandwagon because of it? Absolutely not!

I have my superstitions: in the 2010 playoff run, I made fudge one day, for the game. I called it “Victory Fudge” and then believed that the Powers of Hockey Success might take that the wrong way, so I amended it to “Habs Victory Fudge.” It looks like this:

We won that game. I continued to make Habs Victory Fudge.

I got a new hamster during Round 2, when the Habs were up against a very strong Pittsburgh team. I named the hamster Habsie. Here he is:

Habsie died when the Philadelphia Flyers eliminated Montreal in the Eastern Conference Final. Coincidence? I think not. I never got another hamster during playoffs and definitely refrained from hockey-related names.

I never go negative against the team – it’s all about positive energy.

I tend to embody the word “fan” as it is in its longer form. 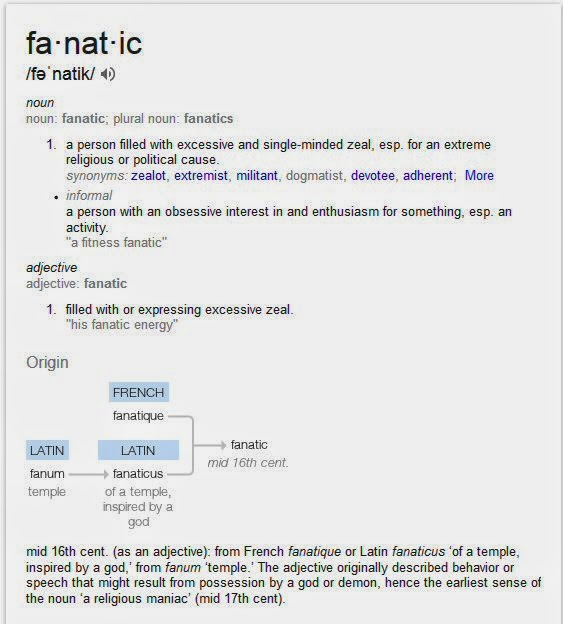 Oh yeah. That’s me. Not eating dinner on game nights because of nerves and excitement (mostly nerves. Okay, ALL nerves). Getting highly irritable if the scoreboard tilts the opponent’s way. Getting emotional – both the highs and the lows – when games end and results are final. Talking hockey. All. The. Time. Ending conversations with “Go Habs Go!” even if said conversations have nothing to do with sports of any kind.

Okay, that last bit – it’s a Montreal tic of sorts. In playoff season, we “Go Habs Go” everywhere on social media. Sometimes with a hashtag, sometimes not. Sometimes the whole cheer, sometimes just GHG. I’ve been on the phone with friends, and in saying goodbye, it might go something like this:

“Enjoy the game. Talk to you soon. Go Habs Go!”

So we are beginning Round 1 tonight, against Tampa Bay. I am feeling very hopeful – many analysts are optimistic that it all points to Montreal. I won’t regale you with the reasons for that. This blog is mainly aimed at my non-hockey, non-Montreal, non-Habs fans (that makes me shudder – how can one NOT be a Habs fan?!), even non-Canadian or non-North-American followers.

I am posting it for one reason. Not to inform, educate or recruit you. Though, should you wish any or all of the above, please peruse the blog for hockey-related posts, of which there are many.

I am posting because with Round 1 beginning tonight, and a strong optimism for a Round 2 showing, I am about to become All Things Hockey – without apology, restraint, or explanation.

I am proud of my city. Montreal has so much to offer. Even in the off-season!

But when it’s playoff time? My city comes alive even more than the coming of Spring (which is taking too long, by the way). People are abuzz with the excitement. Businesses are not only accommodating to game times and hours, but sport “Go Habs Go” signs, logos, and culinary specials. Car flags sprout up like newborn tulips. Habs jerseys – a staple in this city year-round – become even more prevalent. City buses sport “Go Habs Go” above their windshields, scrolling with the bus number and destination streets.  Even our mayor has decorated City Hall: 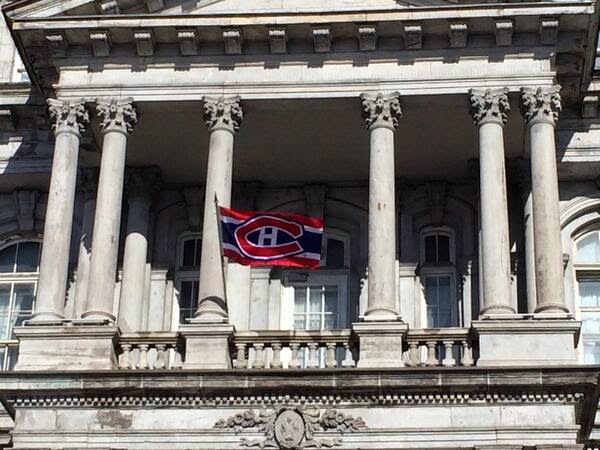 This is a city that LOVES its hockey!!

And when the Habs win a round (hear that, Hockey Gods?), I take my kids, and any passengers they want, driving up and down our main street in our community, honking my car horn along with the other revelers, waving our flag, singing the signature “Olé” song (a short amateur video to demonstrate the song – yes, it’s a soccer chant but here in Montreal, it’s the Habs victory chant). Then we go to Dairy Queen to buy celebratory ice cream. It’s a tradition in my family. (Does YOUR family have any playoff traditions? Comment below)

So, there it is. The reason my Facebook, Twitter and Pinterest accounts will likely focus on hockey for the next 2 months (yes, I am optimistic). Not exclusively – I’ll slip in some political stuff, don’t you worry (*grins*).

But you have been warned: as I am an unapologetic, all-out fanatic Habs fan, I hereby enter post-season with this growing exuberence, pride, and rah-rah outlook. Please don’t hesitate to join in – we’re always open to more fans, and there are never too many.