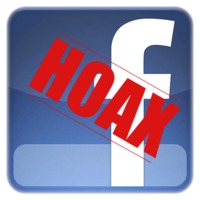 **While this entry deals mostly with Facebook, the scams date back, many of them, to email hoaxes which still make the rounds today. Any of the resource sites below will help you debunk any emails that may come your way**

I began collecting examples for this blog a while back. I was beginning to see a resurgence of fake “WARNINGS”, and “ALERTS” on Facebook, those that had already made the round a few years ago and were returning. Such as the fake amber alert attributed to a Quebec driver who kidnapped a little girl: (click on photo to see enlarged, then back button to return to the blog) 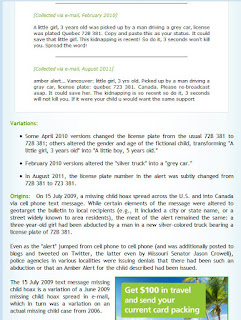 This one has several incarnations and I see it reposted a couple of times a year.

Then there are the WARNINGS! about Facebook changes. The panic that ensues when someone posts something like this:

This only serves to cause people to repost a scam, over and over, to their walls, causing their friends to do the same, and thinking they are doing people a favor, this spreads from user to user. It is not harmful but it is incorrect “information”.

Then this has made the rounds too:

This one was extremely difficult because the “instructions” to stop the evil Facebook from publishing everything you have ever written to everyone in the world actually prevented users from seeing their friends’ feeds. It, in essence, blocked any activity from the friends the user “unsubscribed” from, essentially defeating the purpose of Facebook.

Scammers love this. They watch people try to protect themselves with bogus information and when someone actually looks up the scam (not difficult to do if you know how to use Google or any other search engine), and corrects the user, the myriad Facebookers who have gone through the tedious instructions one-by-one through their friends’ list (sometimes in the hundreds) have to now undo everything they have done.

I have posted corrections to the scams as I’ve seen them emerge. I have posted them as anti-WARNING warnings on my own wall, I have commented numerous times on the postings of my friends, along with instructions and advice I am offering here. I have still seen these scams and hoaxes return over and over, sometimes the same ones, sometimes slightly changed. I have been called “the internet police”.  I have been told where to go with my warnings and I have actually been unfriended by someone who passive-aggressively attacked me on her own wall because I was posting these quite frequently (that’s okay – being unfriended by someone means they weren’t a friend in the first place…hmmmmmm….new blog post….)

Back to our subject at hand:

Now the trend is to make poster-type inspirational quotes and upload them. There’s nothing wrong with that. I have done it, reposting the ones I enjoy.

But the latest comes in the past week, where I have seen this posted quite a lot: 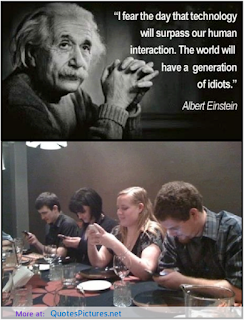 You may agree with the sentiment. You may believe that technology causes idiocy (that is a blog topic for another day). I’ve even seen one blog with this very quote and an entire paragraph on Einstein “rolling in his grave” because he is being proven right.

Except for one thing: Einstein never said this. I found an Einstein quote about technology:

“It has become appallingly obvious that our technology has exceeded our humanity.”

Trouble is, I was fooled by that one too – finding it on several “famous quotes” sites, I thought it was the Einstein quote being twisted in the above meme. However, Einstein did not say this either. It is an invented Einstein quote in the film “Powder” (1995).

Again, it is easy to believe something when it is posted with a serious photo, a pretty font, A WARNING HIGHLIGHT or a believable argument.

But if we do not model critical thinking, if we do not exercise it every single day, then we become the antithesis of humanity, following trends, following what seems to be correct but never checking for ourselves.

It’s easy to verify these things. I have been a fan of Snopes for about as long as I’ve been online. It became my go-to site when I fell for the same warnings I see happening now. I felt stupid, and gullible, and I wanted to prevent it from happening again. Going to that site is rote for me, whenever I see something posted on Facebook. It used to be my habit to check something outlandish. Then something almost believable but that raised my alarm bells as to veracity. Now, it’s a regular habit. And I would like to try to prevent it from happening to my friends.

Scammers and hoaxsters are playing on our vulnerability, on our need to understand the world, and yes, on our humanity. They know that there are inherently good, kind people who will want to be the ones to warn their friends, educate their followers, and stop Evil in its tracks. And I know that’s why so many of my friends post these warnings; they read them, their instinct is to become effective, and they spread the word. (it is why I am friends with you guys – your intentions are always well meaning; it is also what frustrates me when I post the same corrections with links to verify for yourselves, over and over and still see this stuff happening).

Posting warnings and stories works when there ARE true warnings. I have posted missing-children stories, animals who need adopting from our local SPCA, and many lovely inspirations as well. But I have done so with verifiable sources – that is the key.

Hoaxsters don’t mean any harm – just mischief. But they win if we do not become critical thinkers in our everyday activity.

Ironically – this bogus Einstein quote has become self-referential in how many times it is “quoted” and reposted. Perhaps the hoaxster who put this together is having a bigger laugh at how prescient the quote has become.

Think for yourselves. See, if we all began checking these things, the scammers would never get far at all. My group of friends could post to their groups of friends, and we could mobilize a force of anti-scammers, anti-hoaxsters that would slow them down, if not stop them. Sure, they’ll come up with new and different ways to play on our gullibility but let’s continue to think critically.

There are many beautiful, sobering, astounding, inspirational, mind-blowing quotes out there; chances are they will all, at some point, be attributed to someone else, twisted in word or meaning, or are – from the beginning – manufactured for the amusement of smaller minds who have nothing better to do than watch their invented ideas make the rounds (sometimes even to national news media).

I’m not saying you should stop posting many of the wonderful things I also share from so many of you; we can all use some beauty and inspiration, humor and yes, cat pictures. But you should start questioning everything you read as attributed to famous people, as well as the veracity of the myriad warnings you will no doubt continue to see posted.

And you should not become the conduit for falsehoods or misguided ideas. If you do, we can then say that whomever it is who wrote this quote….was right.

Other Sources To Check:

Hoax Slayers
(they also have a Facebook page, a newsletter and are highly trustworthy to debunk the myths)

Facecrooks
(Facebook page as well, newsletter as well, and they will provide you practice advice in the world of technology and social media as well as debunking the myths)

urbanlegendsonline.com/
(This site will debunk urban legends, not specifically Facebook hoaxes, but many of these legends find their way to Facebook and people tend to believe them)

Or just Google part of the “warning” or the quote; chances are the first hit you will get will be Snopes.