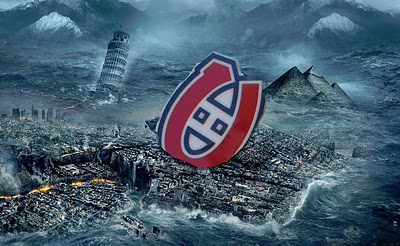 After all, the Habs have lost more than they’ve won, they can’t beat even the puniest teams, and they’re hardly in playoff position at 2 points shy of a spot. The coach is letting his ship sink without so much as a Titanic effort to lock himself in the control room and go down with the rats. The manager is remaining as quiet as the Ghost he is often called, and where is the owner of the team? Taste-testing his beer? Wake up, guys, this is DOOMSDAY!

Now. Everyone take a breath. Our Habs haven’t done what we’d hoped – nay, expected of them this season. They haven’t dominated, they haven’t dazzled, hell, they haven’t even won! So let’s just bury ’em in the rubble of their failings and go find us another team, huh?

We can be the true Habs fans we are so proud to embody: we can bemoan the losses, analyze the failings, certainly cry in our bières and then look forward to the next game with the hope and optimism that comes from believing in a team – not just any team, OUR team.

We can stop calling for heads to roll. We can stop marking the end of a season that is barely 2 months old. We can definitely STOP making blasphemous comparisons between our team and *shudders* the Leafs.

And we can band together and support a team that is obviously struggling. After all, what’s the worst that can happen if we do that, we’ll be disappointed with a loss? Look at the BEST that can happen: we can celebrate as a cohesive fanbase, supportive of our team, proud when they win, and accepting when they lose.

I know what will greet me when this blog gets posted:

Of course we are. Every fan is. Do we have a team that sucks? I, for one, am not prepared to say that. I never am. And never will.

Maybe I AM being realistic. I see the team’s struggling, I’m sad when we lose, and I sure as hell would like to see the world hold my Habs in the high esteem we’ve enjoyed before. But there are worse qualities than optimism, folks.

Statistical rules were made to be broken. Our Habs have broken many in the past and will do so again. And – worst comes to worst – if we don’t make playoffs? Next year is another year. At least we’ve enjoyed playoffs for so many years when other teams are resigned to never seeing post-season play. Constantly. Chronically. And a new season, new lessons learned, not such a dismal future.

And ya know what I say to that? We’re Habs fans. We’re strong and proud, we’re together and loud, we’re historically known too. Are you ready to silence your voice? Are you going to crawl under a rock of shame because the team is struggling? Do you not want to be part of something positive instead of wallowing in every loss? Are you ready to throw YOUR team under the proverbial bus?

Well, there are those who will think, post, repeat that retort. And that one has no answer, so I won’t even bother. Oh, and I won’t shut up.

I will NOT bury my team. I will – realistically – admit that we’ve turned in some dismal performances. What, you’ve never bombed on a test before, only to go onto graduation? Pick yourselves up, loyal fans, stand with the proud and the optimistic, it’s lighter on this side, and we have cookies (even if they DO cost $12 at the Bell Centre)! And if you want to boycott games, I will gladly relieve you of your sucky tickets to see a sucky team suck. </tongue-in-cheek>