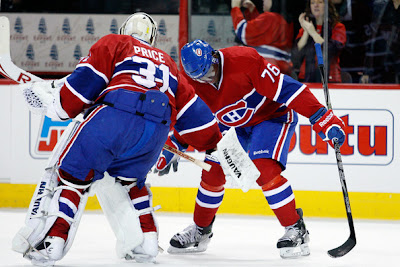 As I write, the smile is plastered across my face. My Habs broke the slide and won their first home game of this season, their 2nd win. This game was overdue but I believe things happen for a reason. What the reason is, we may never know. But it isn’t important. I think we all learned something from the last couple of weeks.

We learned what it feels like to lose, too many times. That doesn’t feel good but in many ways, it banded many of us together. I saw tempers flare, confidence shattered, and people snapping for really no reason. But I also saw fans digging DEEP for the belief in our team, never ever giving up or giving out. Never losing faith or hope that the Habs would come back. And sharing that loyalty with others in both camps.

And come back, they did. Winning 5-1 over the Philadelphia Flyers (now, at least throughout this season, to be known as The Team The Habs Beat), a team many had said would beat us easily. Our guys played hard, constant, fast and aggressive hockey, never letting up on the pressure, and you could FEEL the desperation to win. And the last 10 seconds, P.K. Subban dipsy-doodling with the puck in our zone, running the seconds down, wanting to be the first to congratulate his friend Carey Price and hand him the game puck for his 100th win (which had eluded him this season so far) – that was sweet giddy laughter that felt SO good to emote!

The firing-the-coach talk still continues, despite the surprise firing of A.C. Perry Pearn announced just 90 minutes before the game. I am not engaging in that talk, nor have I ever. It’s all about the game, belief in the team, and the victory.

Now, one win at a time. We face the Bruins next, tomorrow and Saturday. Do I think we can win? I sure do! Because I have an undying loyalty for my team, and a neverending store of positive energy to send their way. I have seen others cautiously happy for the win (“we still only won 2 this season” and “it’s only 1 win”) and I get that too – can’t get too confident, though it’s not as strong as my abject conviction that we have what it takes and will get the job done.

But it’s the team that will take this momentum and drive the point home: We are the Habs. We are the most storied, oldest and most Cup-winning franchise in the League. And NO ONE can keep us down for very long!

Go Habs Go – and well done, guys, you did an awesome job of rejuvenating this city and your fans!!