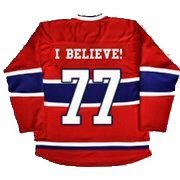 Sometimes, when you walk into a party later into the evening, you see things differently. By the time you arrive, the guests are pleasantly tipsy, or all-out drunk, they’ve eaten, they’ve mingled, they’ve become Part of the Crowd. Your presence may or may not register, but you are on the periphery no matter how many people you may know.

But your perspective is unique. You aren’t tipsy. Your vision isn’t clouded by alcohol or revelry. You may see what’s there more clearly, or you may take your objectivity and turn it into your own story to write. You may feel left out or you may enjoy the separation between the Group and yourself.

The above analogy describes my experience in this, my 2nd season as a Habs fan. I commune with other Habs fans on Twitter, and can discuss only within my limited knowledge of hockey culture. I ask questions, learn and absorb, but my knowledge is also fed to me via the very subjective opinions of die-hard fans. I listen to people like Dave Stubbs, Brian Wilde and Michael Farber for the professional points of view – and sometimes I need them to tell me what/how to feel. For example, my question this depressing season so far has been, “should I panic?”

I’ve been told by the die-hards on Twitter that yes, I should panic (I’m not ready to do so). The Habs won’t make playoffs, we’re already too far out of playoff position. I’ve been told it’s the coach’s fault, the manager’s fault, and in my
inexperienced exposure to the game, I don’t know that I can believe that 100%. I don’t see the coach missing open nets, or giving up goals. Does he make a difference? I know that much to be true. But I don’t believe the players are losing because he’s “lost the room” or is unemotional.

So I try to keep positive. I don’t believe firing the coach is the answer. (But what do I know?) I don’t believe players on the ice are showing lackluster performance because they hate the coach or refuse to play for him or aren’t communicating with him. You can take the conductor away from the orchestra but if they’ve played together long enough, the piece will be as flawless as if there were a baton directing them.

I find tempers flaring on social media. I see fans turning on the team – booing and swearing at them at the Bell Centre, calling them out via social media. With each one, I get more defensive of my Habs, from the players to the management. I try not to speak about things I don’t know or cannot speak of with any authority. Like the new girl in a foreign school, I latch onto posts of those like-minded individuals whose opinions validate mine. My positivity and upbeat optimism seems to rankle others who would prefer to believe the worst. I state my opinion but fear my voice of inexperience diminishes the message.

What I do know is emotions. And humanity. And while I don’t know that our losing streak is a surefire bet against even making the playoffs (because my logical mind doesn’t get that, with 74 games left till the April playoffs, that fact can even be determined), and I tend to eschew statistics (being a researcher gives me the right to question EVERY stat), I can only speak as a loving and loyal fan: I Believe. And no matter what it takes, or how long it takes, I know the Habs can come back and show us what we know they’re made of – they are mes Canadiens de Montréal, and they’ll regroup!

1 thought on “Late to the Party: Through My Eyes”