Yesterday was my birthday. (There – it’s out – you can feel guilty now, if you didn’t acknowledge it)

As part of my Personal New Year resolution to create at least once a day (writing, and graphics), this entry is reflective of the Digital Age’s birthday etiquette – the Facebook edition.

Birthdays, being online, can be really fun. I’ve received coupon offers valid for the week of my birthday, from restaurants, online book retailers, bars, places I’ve shopped. I’ve received Happy Birthday greetings from newsletters to which I subscribe, and even Google had an animated candlelit logo, linked to July 17 events, occasions, and historical facts.

On Twitter, all day long, anyone (including you) visiting your page is greeted with animated balloons drifting up to the top of the page: 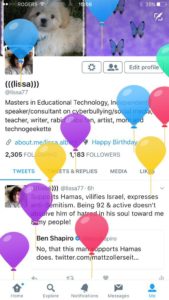 And anyone who is on Facebook knows that the platform provides you with birthday notifications for your friends/contacts (or at least those who have entered their birth dates in their personal information, and made that information accessible to their friends).

Besides an actual notification alert you get (stating “it’s so-and-so’s birthday day, help her celebrate!”, and leading you to the user’s page), it also shows up on the right-hand side of your user interface, first notification in the sidebar. It lists the name(s) of birthdays, hyperlinked to the user’s page to make it that much easier for you to click, and type out a wish.

And if one has forgotten, Facebook now sends you a notification letting you know it was someone’s birthday yesterday, asking if you’d like to send belated greetings; this is done when a user hasn’t clicked the Facebook link to do so on the day of – and yes, Facebook does keep close ties with your clicking and greeting habits.

It takes 30 seconds – unless, like so many people who go the extra mile, one chooses to write a more personal greeting, a special wish, or even include graphics. Some people find nice birthday art online and use that, some create their own (I do that for people with whom I’m close), and Facebook even provides videos from which you can choose the right one for your friend.

Now, there’s no delusion in anyone’s mind that, had Facebook not included this handy-dandy notification, these birthdays would still be acknowledged. In this day and age, with Facebook users who count their “friends” in the hundreds, it isn’t expected that every birthday be remembered and acknowledged.

Family members need no notifications for birthdays (one would hope). Close friends are the same.

But for those people you’ve befriended whom you may never even meet face-to-face – or haven’t yet, or those you’ve not seen for a long time, the platform allows you to make their day that much more special with an acknowledgment of it.

Now, since I became a Facebook user, I can honestly say that it does make the day that much more festive, when the greetings roll in. As I said, no delusion that someone I’ve never met, with whom I interact more casually than others, will actually remember my birthday without the social media prompt. But it’s nice that they did take the time to type out the message, even if it’s a simple “Happy Birthday!”

It’s fun to wake to them (or, in my case, watch them roll in from my overseas friends for whom my birthday occurs before it does here in Eastern North America). It’s fun to watch them come in during the day. It’s even fun to look at my page and see “So-and-so and 75 others have written on your timeline to wish you a happy birthday”.

It’s special when those people who are more peripheral than others still take the time to type out a greeting. I had a few first-timers this year, and it made me smile, and appreciate them that much more.

I’m a big kid when it comes to my birthday. I love being the birthday girl, and I doubt that will ever change.

Technology, and especially social media, changes that for the better.

I’ve watched people whose birthdays are being acknowledged, and how they choose to acknowledge those greetings. I’ve done it a certain way, myself, for years. And it made me think about the etiquette of birthday greetings, online. So much so, in fact, that I decided to write this little observation of how it’s done across the Internet.

Here are the ways in which Facebook users can – and do – acknowledge the greetings they receive. There’s no right or wrong way (except the obvious):

This is when the birthday person wakes the next day, and posts – either first thing in the morning, or mid-morning – something along the lines of:

“I’d like to thank everyone who took the time to wish me a happy birthday yesterday. It was very apprecicated!”

Nothing wrong with that; it does the job. It also does the job of guilting those who did NOT take the time, and shaking them loose, in a flurry of “Oh no, I missed your birthday! Happy belated!” type posts.

(Note: there have been days that have gotten away from me, days in which I have not acknowledged the birthdays of those people in my life, and I have been known to be one of those guilt-ridden belated-greeters tacked onto a Collective Acknowledgment; it happens to us all)

This gets tricky. I’ve seen people post halfway through the day, which may just mean they’re enjoying the greetings so much, they want people to know it.

It also serves as a “shake ’em loose” tool, for those who have not yet added to the chorus of greetings.

The problem with that is that many people don’t check their alerts or notifications until later in the day, or even in the evening; as well, time differences are not accounted for.

As a result, those who post their greetings (which were likely planned for the time of day they were better able to take care of them) look as though they’ve been guilted into posting, or are just following the crowd.

I’ve been known to be unable to post greetings First Thing In The Morning, and when I see those collective acknowledgments, I will include, “I’m not posting because you wanted to remind everyone – I always planned to wish you a happy day” in my personal birthday wish.” (I usually include an emoji to indicate that fact, something with a tongue sticking out or a winky-face)

(It doesn’t take away from the nagging worry that said birthday celebrant may believe I did so grudgingly because s/he posted a big “It’s my birthday and OTHER people have ALREADY wished me a happy one” update; yes, I stress that way)

In terms of etiquette, the celebrant must also take care to follow some informal guidelines so as not to make their entire Friends’ List feel badly.

(Of course, there are still those who never post the birthday wishes, regardless of the Reminder Thanks broadcasts halfway through or day after; they’re hopeless and need no acknowledgment of their boorish neglect)

This is my preferred method. It takes very little extra time to type out my thanks to each one who’s taken their time to wish me a happy birthday. For some, it’s a simple “thank you”, for others, it’s a more personal acknowledgment which inspires a follow-up post (example: “thank you so much! How are things with you?”).

I enjoy greeting each one individually. It’s like opening presents. You don’t usually open your gifts and send a mass email to everyone who gave you one (“just want to send this to thank everyone for the gifts you gave me for my birthday/wedding/anniversary/baby! I love them all!”).

Whether you’re opening gifts at your party, or afterwards, the etiquette is to send thank-you notes to everyone who gave you something for your special occasion.

That’s why I do the individual thanks. It feels more personal, makes it more festive, gets my acknowledgments done on the spot, and doesn’t guilt anyone the next day (though, if you read on, there are ways to acknowledge the non-acknowledgers).

And when friends have done the same, on their birthdays, it’s really nice to get an individual acknowledgment back as well.

Goes without saying – this is just rude.

Combination Of Any Of These

Some people choose to do any or all of these. Keep in mind, you’re influencing behavior if you post a collective note, whether it’s halfway through your birthday, the next day, or even the day after that. But it definitely beats no acknowledgment at all.

Facebook has put in a new feature: the day after one’s birthday, you get a video that sums up some of the greetings you got. It’s a pretty tower cake, whose decorations become windows opening to some of the messages you received the day before. It’s always nice to see the more personalized ones highlighted but if not, Facebook allows you to edit your own video (so you can include those longer, more personal wishes over the simple – but always appreciated – “Happy Birthday” posts).

This serves as a nice Collective Acknowledgment – Day After tool. You can hit “share”, write something to introduce it, or write nothing at all.

And as always, the Day-After post of thanks will invariably bring people out of the woodwork to acknowledge you belatedly.

If I seem judgmental in any of the things I have outlined here, don’t worry – I’m not. These are observations, some tongue-in-cheek, and could – perhaps – serve as a guideline for others. Whether you are celebrating (and being Facebook Celebrated), or reaching out to others who are, you may choose to turn to this post as one person’s take on Facebook Birthday Etiquette.

If you’re wondering how to properly do Passive-Aggressive Facebook Birthday Acknowledgment?

Here’s how I posted my Day-After birthday video. 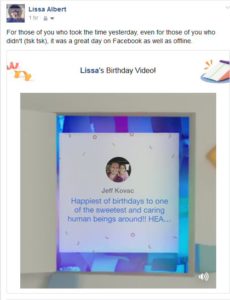 (Never said I didn’t have some of the snark within)