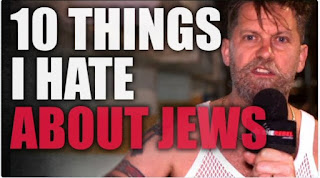 Recently, one of the founders of The Rebel – an online, conservative media outlet formed when Sun News folded in Canada – took several other contributors and went to Israel on a “fact-finding mission”. Ezra Levant, Faith Goldy, Sheila Gunn Reid, and Gavin McInnes went to Israel to report on everything from “the Israeli security fence, to Israel’s border with Syria, and even the settlements in the West Bank.”

What has emerged from the trip – namely from one of its participants – is nothing short of horrifying.

Gavin McInnes – described, in his Wikipedia entry, as “an English-Canadian writer, actor, comedian” and who appears frequently on Fox News, and The Blaze – both conservative media outlets in the USA – is a regular contributor to The Rebel. He has a show that airs four times weekly, and is accessible only through the “premium” content on the site (paid members only).

A report emerged, from a website called Canadaland, an audience-funded site and podcast, and whose goals are self-described as: “our primary focus is on media criticism and media reporting.”

(I believe, in this day and age of blogging and journalism blurring lines, it’s important to have media watchdogs. How they are policed is another story altogether.)

The report is called “We Watched Gavin McInnes’s Full Anti-Semitic Rant So You Don’t Have To“. The author of the article in question is Jonathan Goldsbie,

Goldsbie paid the $6.95 USD in order to watch the full video. The reason he did so was that McInnes released a clip in which he made some very inflammatory statements including:

He also states how “obsessed” Jews are with the Holocaust adding, “I don’t know if it’s healthy to dwell.”
When two well-known KKK/Neo-Nazi activists (David Duke, and Richard Spencer) tweeted their support for McInnes, McInnes struck back. He put out a quick video explaining that the released clip – in which he does, actually, state, not to take this out of context – was taken out of context. He even goes so far as to tell the two alt-right men that he doesn’t like Nazis – “I like Jews.”
When Goldsbie saw that, he paid to watch the entire video to see if, perhaps, McInnes was just – as he defensively stated – repeating the common attitudes of neo-Nazis and if the context were different.
What Goldsbie found was far worse. The almost-hour-long video was filled with McInnes’s own views about Jews, other racist comments – about Asian women, for example (too offensive to reproduce here), and generalizing about Jews in ways that reveal a deeply prejudiced attitude this man holds against the Jewish people.
It’s offensive, it’s profoundly disturbing, and even the excerpts in Goldsbie’s article made me physically ill. And as Goldsbie concluded, there were more atrocious statements even he could not reproduce in his report. It doesn’t belong anywhere, much less on a site calling itself “media.”
To add to this already-sickening report, when McInnes first put out the video, he titled it “10 Things I Hate About Jews.”
He tweeted out the link (I have whited out the profanity): 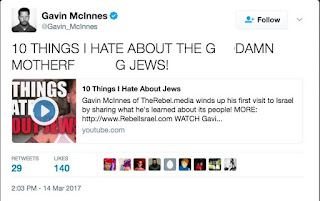 Shortly thereafter, Ezra Levant retweeted The Rebel’s official account (which had tweeted out the link, without McInnes’s colorful editorializing). 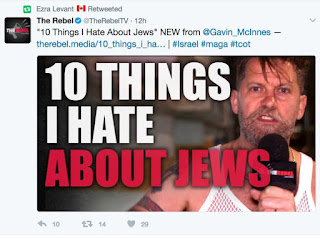 The name of the video was changed in the link – but not, as Jesse Brown reported, in the video. 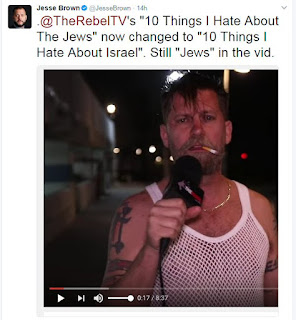 We fight, every single day, against those whose attitudes range from ignorant to outright anti-Semitic. We fight against those who deny the Holocaust, question what happened and how it happened, and even in the face of overwhelming proof, still insist that six million Jews were not exterminated in death camps.
Why are we now fighting a purported pro-Israel media outlet whose very founder is Jewish, and whose conservative ideals are supposed to support Israel, her people, her history, and the Jewish people worldwide?
Why is this going unchecked, after having been posted on March 8th, and has not been questioned?
Perhaps it is because there are many who would speak up but who don’t pay the premium membership in order to gain access to such “premium content” as McInnes’s hate speech.

Perhaps it is because too many people do not speak up.

And now that it is public, now that we have a report from someone who has watched it, it has to be addressed.
I call upon Brian Lilley, Ezra Levant, Faith Goldy, Sheila Gunn Reid, Mitch Wolfe – and any other Rebel contributors – to denounce McInnes. To make the video free to the public so that he can be judged on the merits of his hatred. To leave it up with a disclaimer that its contents are profoundly offensive and should not be taken as endorsed by The Rebel or anyone associated with it.
I call upon The Rebel to suspend – or better yet, fire – Gavin McInnes. He has revealed a side of himself that cannot be unseen, that cannot be discounted, and that must be addressed.
There should be an apology issued by the site, McInnes, and a statement made by the founders of The Rebel, to at least attempt to assuage the concerns of Jews who see this as yet another alt-right attempt to discredit Holocaust survivors, victims, their families, and the State of Israel – not to mention Jews worldwide.
I call upon members of The Rebel Media, and donors, to stand up and address this loudly. Do you support McInnes’s anti-Semitism? If you don’t, do you feel good about being a member of their site, paying for him to peddle his hate speech?
This cannot be left to fade away. It is now out there, and should be addressed.
If readers would like to contact the above, the links lead to their Facebook pages. You can also get in touch via Twitter:
Mitch Wolfe
Ezra Levant
Brian Lilley
Sheila Gunn Reid
Faith Goldy
The Rebel
Perhaps if enough people let them know how deeply upsetting this is, they will act.

Perhaps if enough members withdraw their donations and memberships, they will learn to address this head-on. Levant not only knew about it – he and their main Twitter account re-tweeted in order to disseminate the link.

If it is only clicks they care about, they’ve done well. If it is their integrity? They have fallen tragically far from the mark.

My next move will be to write Fox, and The Blaze, to alert them to this latest. They deserve to know, as both outlets purport to be pro-Israel as well.
I encourage you all to do the same.
We cannot stand by and allow anyone to disparage the memories of Holocaust victims, the dignity of the survivors, or the well-being of Jewish people everywhere. Clearly, we need to hold media outlets to that standard – and more. Especially in journalism.
The bell has been rung. Your move, Rebel Media.