I recently got a ticket. It was March 17, 2015 (I remember the date well, it was a dear friend’s birthday), and I was on the way to pick up my kid from school.

I was approaching a school zone, so I knew the speed limit was lower (30km), and had slowed down. I stopped at the corner where the stop sign was, but because there was a massive snow bank on the lawn just beyond the stop sign, I then inched forward to ensure that I was safe to cross.

There were no other cars, so I proceeded to drive on. As I was halfway through the intersection, I looked to my right. There was a police car parked halfway down the block, and he began to drive when he saw me. (I think he believed my looking directly at him was a sign of guilt – but some people do check all directions as they are crossing an intersection)

I saw his lights behind me, pulled over, and could not believe he was citing me.

When he came to my window, he informed me that I had not made my complete stop. I was adamant in my own defense.

I told him, “Look, you’re going to do whatever you will do, but I know I made my stop, because I always stop at the stop signs.”

He said, “Maybe you usually do, but you didn’t this time.”

(I didn’t cry – once, some years back and very stressed at the time, I did, and the officer let me off with a verbal warning. )

That gave me an idea. I had never contested a ticket before because the few I’ve received (5, maybe 6 in all my years of driving) have been for speeding, and I owned up to it.

I’ve never been stopped for a stop sign violation, and in fact, people who don’t stop are one of my two biggest pet peeves (the other is how few people signal).

So I decided to contest the ticket. Sent in my “not guilty” plea and waited.

I got the notice in August, to appear November 10th, at 4 p.m. And though I knew I was in the right, it was the one thing I needed to get through, the one thing that hung over my head for weeks­.

My Day In Court 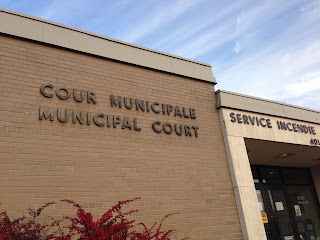 Prior to going to court, I made out a diagram. I showed the two streets – the one I was on, and the side street – as well as the directions (N, S, E, W). I also drew the stop sign, and the snow bank. As well, the police officer’s location was noted.

On the diagram, I wrote out my notes – simply what happened – and took it with me, in a folder along with the notice to appear, and my original ticket stub.

When I arrived at the courthouse, I checked in with the security guard, who crossed my name off a list he had. He pointed me to Room 1.

(NB: I saw no other rooms. Room 1 is aptly named but we live in a small suburb, with a municipal court that serves various municipalities on the West Island…one courthouse, one courtroom – but well named).

He advised me to turn off my cell, which I’d done in the car. I told him I’d done so; was I thinking that by showing how compliant I am, I’d somehow gain points? Maybe karma points. But the security guard had nothing to do with my hearing. Silly me.

I entered the courtroom and another security guard took my invitation notice to appear. He handed it to a young woman sitting to the side of the witness stand, who placed it on her desk.

(NB: the witness stand is literally a stand; no seat, just a podium built into the structure of the main “stage” in the room; I’d have taken photos but something tells me A) it wasn’t a good idea and B) it wouldn’t have spoken well for me when it was my turn to appear)

I watched 3 cases unfold while I waited for my turn. When one woman pleaded her case (talking on her cell phone without hands-free), I listened carefully. The judge advised her that she is under no obligation to prove her innocence; the prosecution is obliged to show evidence as to the defendant’s guilt.

This is not new to me, but it was slightly startling to hear what I’ve previously heard/read in criminal cases spoken in traffic court.

The woman was found not guilty, and when she left, I gave her a smile, which she returned.

Before the next case was called, my name was called out – I went to the front where I was handed the police officer’s report. No longer do the officers have to appear in order for the defendant to argue their case. The report acts as their testimony.

While that kind of differs from the “if the cop doesn’t show up, you win by default” adage, it also speaks to the advantage of the defendant, as the officer is not present to answer questions to challenge the defendant’s testimony.

I took my report – which is given as it is a defendant’s right to know the evidence being used in the case – and sat back down to read it.

When I read my report, the officer had claimed he had a clear view, unobstructed. Yeahrightsure. I knew differently.

But it got me nervous all over again, despite the confidence that had been instilled in me by a Pep Talk before I left.

Nevertheless, I breathed through the nervousness (and drank a lot of water – good thing I had brought a full bottle) and when it was my turn, I walked confidently up to the podium.

My Turn On The Stand

I was sworn in (no Bible, just raised hand) and instead of Cell Phone Woman’s “I absolutely do!” vehemence, I simply and quietly answered, “I do.” – and the judge read the report handed to him by the prosecutor.

He then looked at me and said, “Ms. Albert, what happened?”

I calmly (I think) went through my side of things. I added that I always make my stops, that I set an example for my kids and that my son is a new driver for whom I was being extra demonstrative in law-abiding behavior. I even mentioned that I have no stop-sign violations on my record, which has very few traffic violations in my 30+ years of driving. I had listened to the others testify in their own defense, and anecdotal/character points such as these were common.

But I did not ramble on. I made my points, told my side, and stopped when the facts were said.

When I was done – and I had indicated my diagram – the prosecutor asked me the following questions:

“Can you describe how you stopped?”
This was easy. The Montreal Gazette had published an article before the summer began, outlining the ways in which drivers had to be careful, and described what a legal stop is. From memory (I’m blessed/cursed/blessed with a sharp memory for details), I used the exact words: “I applied my brake, and felt the car rock back onto its back wheels. I even counted to 2 or 3, before proceeding through.”

“How fast were you going when you came to the stop sign?”
(I think they were fishing – this wasn’t even an issue on the ticket)
I told her I was fully aware of the school zone, that my nephews had attended that school and I drive past it very often, so I was either going my 30km or slightly under, in anticipation of the stop.

“When did you first see the police officer?”
Also easy. He was parked halfway down the block (and he had indicated as much in his report; the only difference was his account stated he could see all points of the intersection clearly, and I knew otherwise). I saw him only after I had inched up, had seen that there were no other cars and was already going through the intersection. I said, “I saw him parked there, and as I looked toward his car, he began to drive toward the corner, at which point he put on his lights.”

Clearly, if I only saw him as I was driving off, there’s no way he saw me at the corner.

She verified that I was already driving, and I said yes, my foot was on the accelerator as I was resuming my driving.

She said to the judge, “I have no further questions.” And she sat down.

The judge asked if I wanted to submit my diagram into evidence. He said “I can’t use it in your case if you don’t.” 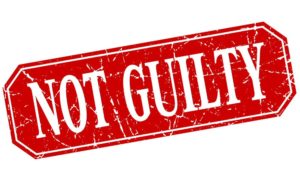 The judge glanced at my diagram, referred to his report, and said, “Ms. Albert, this is a straightforward accounting of your side of the story, which I find credible. I find you not guilty.”

(I so wish I had a video of this – now that it’s over and done with, it’s pretty cool, and that Moment was the best!)

(I think) I kept the huge grin from my face. I did smile, say, “Thank you, Sir,” and rush to gather my purse, water bottle, folder, and book, and then out the door.

I did not keep the grin back then, though. I know I flashed it wide as I emerged into the lobby. The two security guards returned it as I thanked them and left the building.

It was an exhilarating drive home. When I got there, I recounted the entire story for my son, and then went to share the news with others on phone and text.

What Did I Learn?

I must say, all month, I was dreading the 10th of November, 4 p.m.; I was nervous, and even though my worst-case scenario (mentioned above) was nothing frightening, it’s still nerve-wracking to go before a judge, not knowing what the proceedings are like or what to expect, and thinking that the officer who wrote the ticket might be there to face in person.

After the verdict, I was not only exhilarated, I was really quite proud: I did something that did take some courage, and I followed through to its (happy) ending.

Now, it’s smooth sailing through November; the Day Of Court is over, it was successful, and I am not only sitting with all my demerit points intact, but with almost $200 that did NOT have to be spent in this pre-holiday month.

Time to go price the iPad I want…