I have withheld writing about this topic, because – of all silly reasons – it’s an uncomfortable topic.

But as a writer, as a woman with a strongly opinionated voice, and as a member of humanity, if I shy away from the uncomfortable, I’m no better than those who stick their heads in the sand hoping life won’t kick them in the butt.

So this morning, the tipping point propelled me to open this page and begin to break this down.

As you all know, I am involved in the campaign of my local Conservative Party candidate, Valerie Assouline. And I know the politics make people cringe, I know conservatism makes people lash out but I am not one to allow that to shut my voice down.

It’s bad enough to be associated with a Party whose reputation has been unfairly and inaccurately smeared as everything from racist to sexist to homophobic to “right-wing nut job”. Those qualifiers are only assigned to the Conservatives – both here and south of the border – by people who don’t know the truth or care to disseminate it.

But when that kind of derision leads to the vile acts that occurred this week, it is not only infuriating and offensive, it is seriously abusive.

I’m referring to the posters of my candidate being defaced. Oh sure, you’ll say every poster gets graffiti sprayed across the faces of candidates. That doesn’t make it right.

However, these posters were defaced using sexual innuendo, outright sexual symbols, and some were even “decorated” with condoms – filled condoms (filled with what, I don’t know, nor do I need to know). A sex toy was left at the side of her mobile office – a place where her kids can be found when she’s at the office with them.

This sparked an outrage from many people, from all sides. And while we hoped it would be contained, it grew legs.

The story hit social media – as every story will, inevitably.

CBC ran the story on its Facebook page, and though I usually know enough not to read comments, I was compelled to do so.

They were interesting. They ranged in nature from those who found the acts funny, to those who found them justified “because she’s Conservative.” To those types of remarks, others surfaced defending the candidate. One such remark was:

“I don’t support the Conservatives but this was offensive.”

There were those who stood up against the defacement, stating – oh, so logically! – that if one disagrees with a person’s politics, why insult them with sexist, sexual slurs?

It’s good to know there are smart people out there.

But it’s also disconcerting to know that there were multiple remarks supporting, dismissing, or perpetuating the sentiments scrawled across my candidate’s face.

Those who said “suck it up, that’s what public life is about.”
No, it’s not.

Those who dismissed it to the fact that she’s pretty.
Victims don’t deserve abuse or bullying for any reason.

Those who laughed and addressed the nature of the words on the posters instead of the acts of defacement.
The bigger picture is what’s more important

Those who used the platform of a comment to complain about how many posters are up in the riding.
How does that invite obscenity? How is obscenity EVER okay?

People who don’t realize – or care – that the woman on the poster is a real person. A woman with 4 young children. Children who have – till now – squealed in delight when driving in their mom’s car and seeing her picture on posters.

Children – from ages 4-11, 3 of them girls – who might have seen those defaced posters, and had more questions than their parents were ready to address at this point in their young lives.

People making comments like those who either didn’t think, or didn’t care about the feelings of violation not just our candidate, but every woman experiences when confronted by the kind of vulgarities smeared across the face of a female candidate.

People who think it’s okay to invoke sexist remarks whenever the opportunity arises. And those who are, sadly, so desensitized to sexual innuendo as a slur that they don’t realize the deeper implications.

But we expect that kind of reaction from the public. As tragic as that seems, it has become part of our experience in politics, or public life of any kind, to expect people to veer into the dirt, and to go there.

Where the tipping point came, for me, was this morning when one of our campaign staffers posted this screenshot on Facebook:

Shaun Lydon is a member of the team for the NDP candidate running in LaSalle, Verdun, Ville Emard. 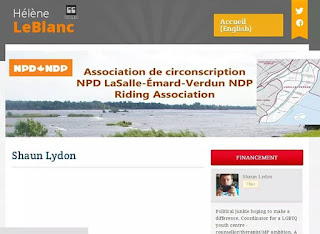 But as we all know, the Internet is forever, and a screenshot of his tweet has been circulating.

Someone confronted the NDP candidate about her team member, and her generic, dodgy reply was inadequate: 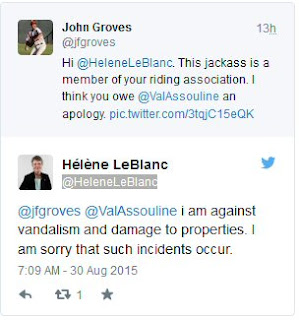 Not one to keep silent, I got into the fray: 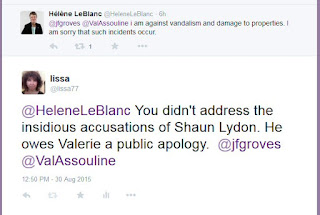 And there has been no response.

Folks, this isn’t something that should go unacknowledged. If someone on any political team – in any democratic country – steps out of their professional zone, they should feel the full repercussion of backlash.

Correction: politics can be ugly. And that’s too bad, because if there were fewer politics of personal destruction, perhaps the general public would get more involved, have more of a say, and vote with their heads not with their eyes closed, their noses held, and their “eenie-meeny-miney-moe” low-information-voter tactics in full force.

People get turned off politics because they lump all politicians into one category, and I believe part of that is the ugly nature of campaigning.

And it’s the politics of personal destruction – the attack ads, the negativity and especially the personal (politically irrelevant) slings and arrows that turn us off even more than the sniping about policy.

As a woman, I have been deeply offended by what I’ve seen on the posters this week. As a human being, I am dismayed that vandalism is still the method people use to express their dissension.

But I don’t believe this was dissension. I believe it was an attempt to denigrate, devalue, objectify, and bully this candidate in particular.

As I well know, as I’ve continued to impart to others, bullying is about power differential. Those who bully feel they are more powerful than their target. In these cases, it is both anonymity and – likely – gender that makes the attackers feel more powerful.

But in the end, they have no power. Because their utter lack of decency nullifies any perceived power.

It is up to us to speak out and be an example of the decency they sorely need to acquire. It is up to us to stand up and denounce this kind of defacement and this attitude toward women, toward conservatives, and toward candidates – of all parties.