In the spirit of full candor, I will reveal – to those who do not know this about me – my utter admiration for this man. Among my political heroes, Benjamin Netanyahu is in the Top 5. And likely, if I think about it, #1 of all.

Israeli Prime Minister Benjamin Netanyahu will address a joint session of Congress on Tuesday, March 3rd, and it will be historic. He is not being well received by those who support the King President of the USA, mainly because said president has no love for Israel or her leader.

But I cannot stay silent on my feelings about the speech. I’ve had debates with those who are against this visit, and I’ve heard all the points of contention. “It’s a political stunt, two weeks before an Israeli election” – that’s one.

Here’s the thing: even some Israelis don’t agree with this speech, and it puts Bibi’s re-election at risk. Clearly it is not a political stunt if the odds are against landing on his feet. Clearly his love for his country and his concern for her very existence are more important than his chances at re-election. That pretty much negates the “political stunt” argument.

I’ve heard it said that the timing was not coincidental. Here’s something I wrote in response to that argument:

The timing of this is not devious – it is unfortunate. The deal deadline keeps getting pushed back because the 0bama administration’s style is to do exactly that instead of adhere to an actual deadline (see: Syria and red lines drawn in chalk). If they’d stuck to the original deadline, there would be no need for the speech because the deal would be dead. Instead, Iran is calling the shots, the USA is begging them for another chance, desperate to leave some sort of big grand gesture as a legacy for the Clown-in-Chief, and the new deadline is end of March. Netanyahu didn’t choose for the stars to align this way. They did because 0bama’s minions can’t say no (see: bad parenting and “just one more glass of water before bed?”). Blaming Netanyahu for the timing is like blaming James Foley for daring to get his head cut off shortly before 0bama’s golf game.

It’s true, too: the deadline has been moved by the administration because they want the deal so badly, they don’t know how to say “no” to Iran’s demands. The cartoon below illustrates this all too clearly. 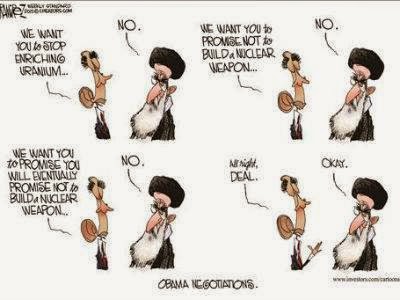 I’ve seen Democrats interviewed because they have stated they will boycott the speech. The rumblings of potential boycotting were soft at first. Nancy Pelosi (that paragon of wit and intelligence – yes, my sarcasm is showing) had started the ball rolling when she said she wasn’t encouraging a boycott but oh, many people on the Hill have very busy schedules.

What is more important than listening to the visiting leader of America’s strongest ally in the Middle East, the ONLY democracy in that region?

Then, the word “boycott” became a shameless self-characterization of what they were doing, and now it seems approximately 50 Dems will walk out or simply not attend.

Many of them are Jewish.

If the Republican representatives have the grace to attend the State of the Union, a yearly lie-fest, then the Democrats should, too, show grace and dignity to a man who may well end up winning the election in 2 weeks, someone with whom they will have to work in the coming years. Burning their bridges tomorrow is not only foolhardy, it is beneath the office they hold. And it is age-inappropriate.

It’s been said that the reason this speech is “wrong” is because there was a breach of protocol. The White House wasn’t asked, or informed, Netanyahu was just invited by the Speaker. Here’s the thing: that happened in 2011 as well. But in that case, the White House had no problem, no complaints, and did not use it as a political football. Why not? Probably because there was a general election coming up and the Emperor President still had to maintain a facade of at least tolerating Israel and her leader.

There was nothing illegal about the Speaker’s invitation. Nothing unconstitutional. And just last month, PM David Cameron visited from the UK and was given carte blanche to phone and meet with Senators in private to promote the Iranian nuke deal.

Are Democrats and their party leader so worried about breach of protocol that they bristle because the Prime Minister didn’t ask “mother may I?” before accepting the invitation appropriately extended to him? Should Emily Post’s spirit be invoked when the survival of an entire country is at stake?

Please spare me! Protocol is a convenient, and specious argument put forth by the same administration that blamed an obscure YouTube video for the murders of 4 brave Americans – one a US Ambassador – by terrorists who, I’m sure, never knew the video existed, much less took umbrage with it.

My anger lies with the immaturity of those who are supposed to be representative of their constituents. I would bet most – if not all – of the voters who put these people into office support Israel and would support their reps being in that chamber for that speech. Instead, they’re stomping off and playing baby games and showing their true colors.

Why are they so afraid to attend? I even heard Rep. Steve Cohen (D-TN) state that he’ll WATCH it, and read all the pundits afterwards. He just won’t be there personally. Why not? Does he believe his body in the seat shows support? Does he not understand how the First Amendment works? If he – and his fellow tantrumites – don’t like what the PM has to say, they are free to give interviews ad nauseam to refute PM Netanyahu’s words. But it seems they’re afraid to show up – do they know something we don’t? Have they been threatened by the administration?

There isn’t enough room or time for me to list all my grievances with the way this event has been treated. I turn, instead, to the wisdom and humor of Benjamin Netanyahu himself, at the AIPAC conference this morning:

“You know, never has so much been written about a speech that hasn’t been given.”

I urge those who are on the fence, or have already made up their minds, to be open-minded and turn it on. Or watch it on video when it’s posted. Try to see it his way. His country faces an existential threat from a regime that chants – regularly – not only “Death to Israel” but “Death to America”. The Iranians want to see Israel annihilated. And if Americans – or Canadians – believe it ends there, they’re just fooling themselves.

I am proud of Prime Minister Harper’s, and Canada’s, unwavering support of Israel, proud that my country stands shoulder-to-shoulder with my spiritual homeland. But I am angered that our closest neighbors are governed by an administration that holds a view that is diametrically opposed to ours. And that so many of them buy into that rhetoric without being critical thinkers and seeing the whole picture.

I will be watching, and I will re-watch as I watched today’s AIPAC speech numerous times. Benjamin Netanyahu is the true epitome of a Leader and, as outlined in an article today, is the true Leader of the Free World.