Meet Spirit. He is the first cat I have ever owned, and he has quite the story to him… 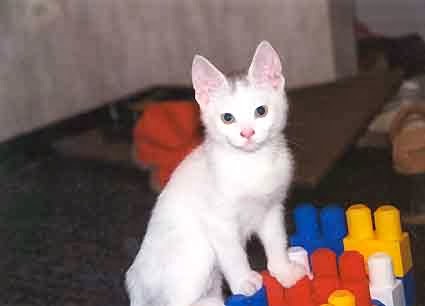 Since Toebi went over the Rainbow Bridge, I have yearned to have another sweet cuddly friend in the house. However, with Sam growing up from babyhood, and Joshua needing me as well, it was not feasible to have a dog, which requires – bless them – much attention and training. For the past 3 years, I’ve looked at other pet owners with the envy of an animal lover and the desire to join the ranks again.

One day while hanging out at Bonnie’s (the art supply mecca where I get all my goodies), I saw a kitten she had there. It was one which needed a home, but was so skittish, I could not even get a moment to say hi. The following week, I was there, and someone had the kitten in their arms. I petted it, thoroughly enchanted, and when she put him down, he rubbed up against my legs. Dropping my purchases, I sat down right there and the kitten crawled into my lap. At that point, I was told he had a home to go to, and I was very happy for him. But it got me thinking. Could I be a cat owner? Could I join “the other side”? And I knew that I could…so I began a quest for information, asking everyone I know who is a cat owner…training, care, personality, compatibility with children etc. The answers were all very positive, and I set out to look for a kitten.

I checked pet stores, but no one seemed to choose me. I went to the SPCA on Mother’s Day, found a beautiful little gray kitten…unfortunately, Perry was not as amenable to the kitten as I and the children, and so we left without the kitten. Devastated, though, as I really had my heart set upon it, I decided to just bite the bullet and go for it. The next morning, upon my return to the SPCA, my heart broke when I saw that the beautiful kitten was adopted. But that wasn’t going to stop me from my quest. 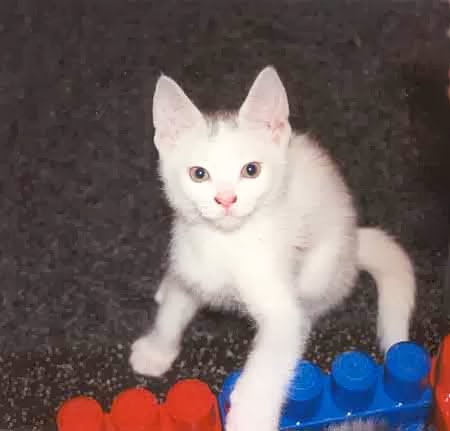 I went back to the SPCA every single morning for a week, before work, and no kittens “spoke” to me…until Thursday of that week. I walked in, and there, in one of the cages, were identical twins. Pure white, with a lovely unique gray band stretching from nape to widow’s peak, and they were both alert, sitting straight and watching me. One of them pawed out at me, and my heart was captured.
I played with him through the bars of the cage, mulling over in my mind that I wanted this kitten. However, there was no way I could take two – and I felt sad breaking up the pair. Heavy-hearted, I left to go to work, and thought about those kittens all day.

Friday, May 18, 2001. Joshua had no school. I left him at my mother’s house while I attended a meeting, and then came back to pick him up. On a lark, we stopped by the SPCA. There, in that same cage, was only one of the twins – the other had been adopted. My heart skipped a beat…could this possibly be meant to happen? I put my finger up to the cage, and the kitten pawed out at me!!

This was the kitten who had flirted with me the day before!! Joshua was enchanted, and asked if we could adopt him. I hesitated. Along came Shirley – the volunteer there – the first time I was seeing her since the week before, and she asked what happened. When I explained it, she said that a kitten is an easy animal to have and that I should consider adopting. I told her I was thisclose to saying yes, when Joshua said, “Mommy, he choosed me! We have to adopt him!”

Shirley said to me, “would you like to play with him?” And of course I said yes. She took him out and handed him to me, and took us to a cordoned-off room where we could put him down. So playful, so affectionate – docile in my arms, and vivacious on the floor, he seemed to be the perfect pet. Due to his nature, and his color, I even knew what I would call him: Spirit. Joshua said to me, so hopefully, “Mommy, can we get him?” And in that moment, I knew. And I nodded. And said, “yes.”

We put him back in the cage so that I could fill out the papers, and Joshua stood at the cage. I called him to me, not wanting him to be alone in the room, and he said, “I need to stay with Spirit.” So I left him there, smiling as he said to a couple looking at Spirit, “that’s the cat my Mom is adopting for me.” We went downstairs while another SPCA worker took Spirit from the cage. Joshua asked, concerned, “where are you taking him?” and the woman explained that she would put him into a box for transporting. “But you’re going to put holes in it, right?” Joshua’s concern was so real. She assured him that yes, she would, and we went downstairs. I filled out the papers, chose a litter box, kitten food, and dishes, and took everything to the cash register. A large box was brought to us, punched throughout with holes, and Joshua’s face lit up. After paying the fees, I looked at all I had to carry. Joshua, without having to be asked, took the litter pan with all the things we’d bought, and said, “I’ll carry these for you, Mommy.”

All the way home, Spirit nipped at my finger through the hole, and mewed. Joshua was giggling with excitement, and my own enthusiasm was uncontainable. We went to pick up Sam at school, and he was beside himself… his teacher was waiting with him, and we told him there was a surprise in the car. His teacher knew we’d been looking for a cat, and she was so excited when she came to see our new little guy.

The end of the story is quite a story in itself…

When I went to pick up Sam at school the following school day (it was Tuesday, as Monday was a holiday), his teacher handed us a gift-wrapped ceramic bowl and a cat toy for Spirit, welcoming him to our family. Two days after that, she told me that a little boy from the class came up to her, after we left, to tell her that he, too, has a kitten. She asked his mother upon her arrival, if this was indeed true. The mother replied, “yes, we got a kitten last week, and I have to tell you, I felt so badly…he had an identical twin, but we could only take one cat..”

This is the synchronicity (meaningful coincidence – a concept I have been aware of for 15 years and have studied) which follows me in my daily life…the chances of Spirit’s twin living so close, belonging to a classmate of Sam’s, well, this is just par for the course it seems…*s*

And now Spirit resides here, at home, where even Perry has admitted that he is cute, and smart (litterbox trained from the start *proud mama grins*). Spirit lives up to his name – unfortunately, sometimes it’s 2:00 in the morning, but I guess he’s a night owl like his mom…

And since it’s tough to resist that camera, I hereby present to you… 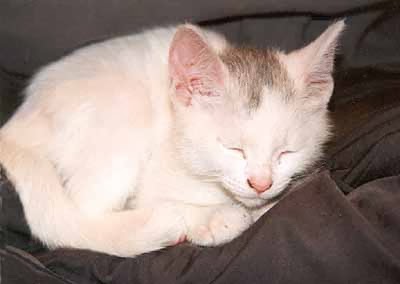 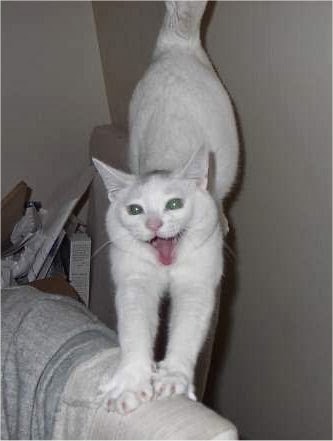 Sam, being a preschooler when Spirit came to us, has always loved Spirit but was a little more wary of the unpredictability of a cat. This past summer, Spirit began a love affair with Sam, seeking him everywhere, flirting with him, snuggling with him, and showing a little of that rivalry when Sam is giving Theo “tummy tickles” – pawing at Sam, and rubbing his head up against Sam’s shoulder as if to say “hey – me too!”