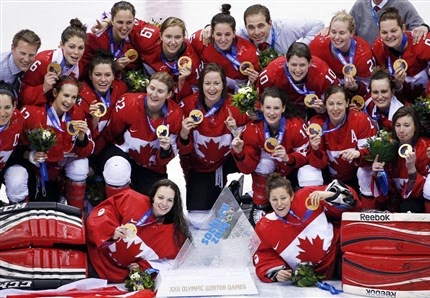 Let me preface this with my unequivocal support for, belief in, and confidence in my teams. Whether it’s the Montreal Canadiens, or Team(s) Canada, I always have faith we will prevail.

Today’s game of hockey, played between two sworn rivals – the American and the Canadian women’s teams – was one for which I had absolute unshakeable confidence. Canada had dominated the USA last match, and were set to repeat not only that power, but another gold-medal winning performance.

The game began, and there I was – in my car as my son was in his 1-hour class (I drive him in and find a parking spot for the hour or less). I was listening to the game, watching on my iPad app, and increasingly dismayed at how it was unfolded. We weren’t scoring. We were getting chances, but we were not scoring. Nor, for that matter, were the Americans. So with the first period down, both teams were scoreless.

USA scored in the 2nd. I felt rising nerves but quelled them, knowing our girls could come back to tie that. But it didn’t happen.

By the third period, when the USA got their 2nd goal, I was positively morose. Did I still believe in a comeback? Yes. But as the game clock counted down precious minutes, it was becoming less and less a possibility.

By this time, the kid was out of class, and we were on the road. Listening on radio, we were both on edge. But with 3-1/2 minutes on the clock, Canada scored a goal. Suddenly, it was a new game. Still, the clock was moving too quickly. When the USA almost scored an empty-netter, my heart about stopped. Hitting the goal post was way too close for my comfort!

With less than a minute to go, Marie-Philip Poulin tied the game, and I shouted, “UNBELIEVABLE!!!” (poor Josh – I yelled in his ear)

Driving down the 20, I had to believe other drivers were listening as well. And if they weren’t, they knew something was happening in my car – my fists were pumped, my smile was ear-to-ear, I was probably emanating enough adrenaline for everyone to feel the electricity!

As the game was in intermission, we stopped at Dairy Queen. I’d promised my son an ice cream cone, and so, I watched on my iPhone as I was served. Sharing the “story” so far with the girl behind the counter, we shared a “Go Canada!” and I left.

We drove home, OT had begun, and I watched at red lights, listening in between. When we got home, the Americans were just about to receive a penalty – something the commentators believed should have been a penalty shot for interference. I walked into the house, eyes glued to my phone as the officials discussed the penalty with various coaches. By this time, Josh had turned on the television in the kitchen.

I walked in, put my phone down, and it was at that moment Marie-Philip Poulin (yes, again!) scored the overtime winner. Talk about timing!

The emotions that followed were a jumble. DEEP pride and awe in the women of Canada, who have that Never-Give-Up spirit, and showed it today. Heartbreaking sadness (to the point of tears of sympathy) for the Americans who, for all intents and purposes, should have won this game. Kudos to them. I have no smugness or gloating in my heart – because they sure did push us to our limits, and beyond. I’ve seen some mean-spirited gloating. I won’t engage.

Sang the Anthem in my kitchen, with tears in my eyes. And celebrating our country’s victory on social media, which is the next best thing to being in a bar or pub and shouting with the crowd.

Now, tomorrow. Our men’s hockey teams meet as well. And it isn’t for the Gold, as it was in Vancouver. It is to see who advances. Do…or die. (It only feels like a Gold-Medal game)

And though, on paper, our guys are deep in talent, strong and successful on their respective teams, these Games have been a challenge for them. They have not scored as many goals as their opponents tomorrow have throughout the Olympics. And considering how confident I have been in their ability to beat Norway, Finland, and Austria? Those three games (okay, two out of three – Austria was a cakewalk) were nowhere near the blowouts they were predicted to have been.

Facing Latvia in the quarterfinals, we were given more than a run for our money. It was not predicted to have been so. It was a nail-biter in every way – and no, I didn’t believe we would lose, but there was a nagging “what if we don’t move on?” in my stomach. I watched the last period on my feet, pacing, experiencing physical discomfort from the stress. Let’s face it – when the opposing goalie, a relative unknown, has faced 57 shots in a game, and we only have 2 goals on the board, you know you’re up against a tough team.

Tomorrow will be a huge test. The Americans are strong. P.K. Subban is not being put into the line-up (no, this isn’t going to turn into a piece about P.K. – I could. But I won’t). And we are facing a successful team.

We have Carey Price who has only let in one goal in each of the 3 games he has been in nets. We have a strong defensive core as well. If we can hold them off, and just score one goal more than they do? We can move onto the Gold Medal game. Which, I believe, we can win.

This has been the first Olympics in which I am totally into hockey. In 2010, I was a practically-new hockey mom, understanding some of the game, but nowhere near as rabid a fan as I was to become when the Habs went deep into playoffs that summer. Now, I know more. I feel it more profoundly. I take it harder. And I follow every  minute.

I’m not sure I did myself any favors, becoming so intensely fanatic.

But – to paraphrase a famous line from a famous movie –  hockey, I can’t quit ya.