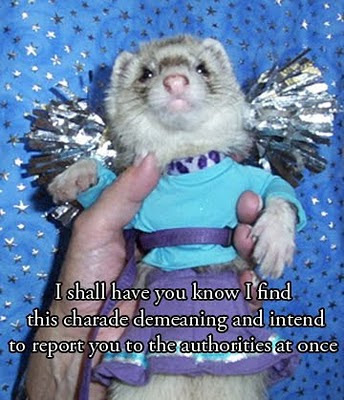 In the past couple of weeks, I noticed – as I’m sure so many of you have – the cartoon character profile pics popping up on Facebook, along with a status: “Change your profile picture to a cartoon from your childhood. The goal? To not see a human face on Facebook until Monday, December 6th. Join the fight against child abuse, copy and paste to your status and invite your friends to do the same.”

I have always thought of these status updates as digital chain letters. We all got anonymous chain letters when we were younger. “Copy and mail this letter to 10 of your friends, and you will have good luck.” (usually these contained some miracle story of Edward or John who had done so, and won the lottery the next day or whose dream soulmate had walked into their lives. They also related the horrendous consequences of Al or Herman who did not send the letter, and died in fiery crashes or whose entire fortunes were wiped out).

Today, if you continue the chain, you are a group player, a cooperator, a good Facebooker. But if you break the digital status chain, if you don’t follow the crowd ,you are either seen as unwilling to play, a grinch, or not part of the group. Why? What if you DO play? Well, I’ve read peoples’ self-assessments, one in particular, “I’ll be a sheep with everyone else,” and frankly, does that not accurately describe what we are when we follow the crowd, especially when there is an unknown faction leading us? Heaven forbid you – like I – speak up against the particular trend du jour! Ire is rained down upon you!

The story behind this particular meme (meme: “The term Internet meme is a phrase used to describe a catchphrase or concept that spreads quickly from person to person via the Internet, much like an esoteric inside joke.” – Wikipedia) is that it was never begun for a Cause, per se. It was merely a bit of fun that someone wanted to spread, and was never intended to raise awareness of anything. Somehow, it got hijacked for a cause, albeit one of relative irrelevance, and everyone was off to the races.

Enter The Wet Blanket: me. I couldn’t understand how changing one’s profile pic to a cartoon could possibly relate to stopping child abuse. I did some researching of this meme and found this article, only one of many in which is clarified that the originator intended for this to be utterly meaningless fun (and there is nothing wrong with that at all, by the way). So I posted on my friends’ pages, after they got on the bandwagon, stating my opinion. One of my friends – the comedienne Marsha Warfield – actually changed her profile pic to a stop sign bearing the words, “Stop Child Abuse And Neglect” and her status update merely read: “F*** cartoons.” Aha, here was someone who thought the way I did!

So, my raising people’s awareness of this meaningless meme began to raise their ire as well. They became defensive, accused me of being self-righteous (or so I interpreted), and exclaimed, “But it doesn’t hurt anyone, so why not?” No, it doesn’t hurt anyone, but child abuse does. And changing a profile pic, stating “let’s be aware of this topic” and sitting back to feel good about one’s helping society to get better …that doesn’t help kids who are living in pain, fear, and increasingly eroding self-esteem.

My points are fairly simple: awareness isn’t enough. Awareness and understanding are a good beginning. Action is what’s needed. If someone is so incensed over child abuse, there are many ways in which they can help: volunteer at shelters which house these families. Donate money to shelters to keep them in operation. Stand up to the woman in the shopping center who has slapped her 2-year-old for crying, or who is pulling just a little too hard on her 4-year-old’s arm to get him to keep up with her. We all need to take responsiblity for that which so many believe just isn’t their business. But raising awareness isn’t enough.

I was challenged in the dialogues that followed my “self righteousness”. How can I, someone who is not only raising awareness of cyberbullying but basing my entire graduate thesis on that very thing, say it doesn’t help to raise awareness of child abuse to change a profile picture? Again, I feel it’s simple: what I’m doing is a thesis which is leading to my new career of educating those who are responsible for kids who might be engaged in cyberbullying situations. I am not simply raising awareness. I am doing something about it. I am going on radio and telling whomever will listen that it is about time we educated the educators to be vigilant and recognize this new heinous threat to our children. I am creating a program for teachers, and one for kids, in which they can interact with the materials and become proactive. I am hoping to continue my research into the topic so that we can have an idea of the impact awareness has on those vulnerable to attacks. That’s what I’m doing in my field. Raising awareness is today’s feel-good catchphrase. Too many people believe it ends there. Sadly, awareness fades if the topic is not a part of our everyday life. Awareness memes fade even faster. And the meaning of the action fades sometimes before it’s even minutes old. I counted at least 6 friends who, after posting their status updates and changing their profile pictures, received responses exclaiming how, “I LOVED that cartoon when I was younger!” or “He’s my favorite cartoon character!” Nothing about the Cause, nothing about the seriousness of child abuse, and nothing about how this person is now changed because of the picture.

I’m not criticizing anyone who wishes to have fun. Heaven knows, we could all use more of it in our daily lives, even if it were a fleeting picture on a Facebook page. That’s why I post hockey news and comic strips alongside the bullying links I have on Facebook: we can’t live serious all the time. But when something calls for serious action, I find it strange to invoke that which brings out delight and laughter. There is nothing fun or funny about child abuse, breast cancer, bullying, animal neglect…so why do we insist on making Facebook trends so diametrically opposite to the causes they are purported to promote?

In closing – I’m not a wet blanket. But if I bring to the table some serious discussion, please don’t feel I am attacking your sense of fun; I am only asking you to justify why you’re asking me, as a FB friend, to change my picture, and my status, and in the name of a cause or an illness. We have to remember we are thinking, able human beings, who CAN bring about change in the real world. We should not become computer hounds who are led to believe that by talking about or illustrating it on Facebook, we will cure the evils of society. Let’s bring action back to our communities; use Facebook to organize a day of offline action. THEN I’ll change my Facebook pic for it!!

3 thoughts on “Ticking off the masses”