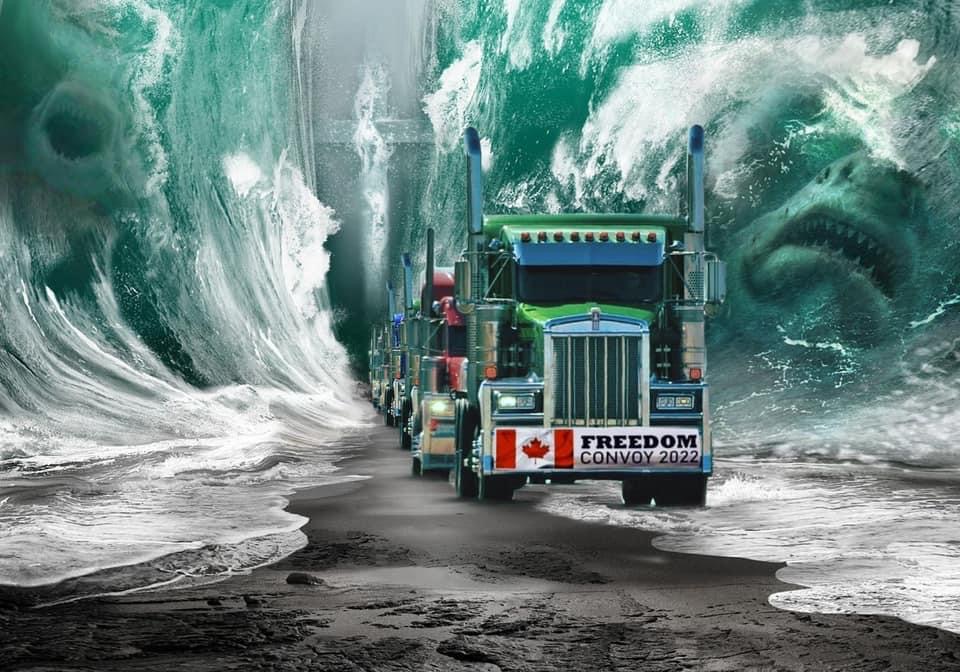 “Never doubt that a small group of thoughtful, committed citizens can change the world. Indeed, it is the only thing that ever has.” – Margaret Mead

You might have heard the news: there’s a convoy of truckers heading to Ottawa as I write this, early Thursday morning, January 27, 2022.

Canada has been a country governed by an inept federal government (Justin Trudeau’ s Liberals), with provincial governments also chiming in. When Covid hit, the world struggled to find a way to deal with this potent virus; at first, it was deadly. It began to mutate, and now – over 2 years later – it has simmered down to a variant being referred to as Omicron. More contagious, less deadly.

The Federal government – a minority (in Canada that means the government needs enough support in Parliament to do anything) – fumbled through. Trudeau stayed in his house, coming out once a day for 15 minutes to update the situation (while his health ministers gave a separate presser at a different time). Trudeau tried to grab power in unprecedented ways, including giving his minority government two years of exclusive say over Parliament without the need for any votes by the other parties (thank goodness that did not pass, as he backtracked following the backlash).

After distribution of vaccines began country-wide, he began to put mandates into place. In order to coerce encourage those who were vaccine-hesitant, he announced that travel would be restricted only to the vaccinated. Despite denying that he would put a vaccine “passport” (what I refer to as a vaxpass; passports are for real travel, not entry into restaurants), he did put that measure in place. He restricted air, train, and seaway travel to those with vaxpass. He has used inflammatory language about those who have chosen to forego vaccines, calling them “racists, misogynists” and asking “do we tolerate these people?”

The provincial governments have also cracked down. Here in Quebec, those who have not been vaccinated cannot eat in a restaurant or coffee shop, cannot attend movies, sporting events (minor to major), enter museums, and as of this week, cannot shop at big stores like Costco, Walmart, Home Depot, and any other establishment with more than 1500 square metres whose primary purpose is not food (grocery stores and pharmacies are exempt – for now). A decisively punitive “health tax” only on the unvaccinated has been threatened as well.

These mandates have no scientific or medical justifications, and added to the federal mandates, have become a source of hopelessness for many people who only want to exercise the right to bodily autonomy.

The trucker convoy is heading to our capital, Ottawa. It began a few days ago and I became aware of it peripherally.

Then it became a social media phenomenon, and I joined a Facebook group of almost 600,000 members. On that page, they posted a link to an app called Zello. It is, for all intents and purposes, a massive walkie-talkie app with channels for groups as well as individual contacts (cell phone companies hate these apps).

I joined the Convoy channel a couple of days ago, and I was instantly down the rabbit hole. I heard truckers, moderators who are truckers or work in the transportation field, supporters, kids, families – everyone just adding their voices to encourage the truckers.

I listen almost constantly. Instead of music while I work in the kitchen, I have Zello on. In the car, it’s Zello. As I type this – you guessed it – Zello.

I’ve keyed in (gotten through to speak over the channel) to offer my thanks and my support and I am now a regular contributor.

What is the purpose of the convoy?

It isn’t to protest the vaccinations. Despite the fact that Trudeau has stated all truckers must be vaccinated, that isn’t the purpose.

I will let their words explain it:

It isn’t political. In fact, the Facebook page is also a place where we refrain from extreme political statements.

It isn’t about vaccines, and it has grown exponentially within the two days I’ve been involved.

It’s gone worldwide; two of the moderators on the channel tune in from Ireland. There is a list of over 60 countries supporting it. Australia, also under tight restrictions, has organized its own convoy for January 31st. There are thousands of trucks coming to Canada from all over the United States.

Media have covered it – accurately and inaccurately. Not surprisingly, Canadian media (paid for by the Trudeau government) have dismissed it; at first, they “reported” that “a few dozen” trucks were headed to Ottawa to protest icy road conditions.

They have no choice now – the convoy is over 58,000 trucks long (without the Americans), and is about to be inscribed in Guinness as the longest convoy in world history.

On the other side of things, the convoy has made news on The Daily Wire, P.J. Media, Joe Rogan, Newsmax, Fox, and other conservative outlets – both digital and on the air.

I have defended this movement (because that is what it is) to those denouncing it as a political statement, a protest, a cause, or any of the other accusations leveled at it.

They want to arrive in Ottawa, and be heard. They have picked up personal vehicle followings, citizens who want to show support and just be a part of it.

Some people have “reported” that the truckers won’t leave until Trudeau resigns. That is not an established goal.

A little after midnight, a caller to the channel asked: “Does anybody think this is actually going to do anything?”

I keyed in and said:

“Does anyone think this is actually going to do anything? Have you looked around? Media have been covering this worldwide. The Facebook group has exploded with member participants. This channel goes to 5000 people all at once during certain times of the day. There are almost 60,000 truckers getting Canadian flags waved at them from mobs of people lining the streets, overpasses, and highways. There are people expressing gratitude, messages of hope, and it has united us like nothing has in a long time here in Canada. Yeah, it’s doing something. Whatever happens after they get there has yet to be seen. But it is, very strongly, having an effect.”

Others joined in and replied to the question. It was is inspirational.

Here are a few of the effects it’s already had:

The Mead quote instantly sprang to mind after the conversation took off; I read it on the air, but said we can easily substitute “small group of thoughtful, committed citizens” to “large group of courageous, principled truckers.”

It has been a few days of immersion into this world. It has definitely given me a sense of hope that the end of this dark two-year nightmare is around the corner.

And so, I will stay positive insofar as what effect they will have on policies. They will be staying in Ottawa – for now it’s an undefined amount of days – until there is some response.

Will mandates be taken down? I don’t know.

Will the eyes of the world be turned toward the capital of my country? Absolutely.

I am even considering jumping in my car and heading to Ottawa early Saturday morning. As it is less than two hours from my door, it shouldn’t be a tough journey. I’ve yet to decide, but am leaning toward the trip. I feel like I need to be part of this Movement.

Whatever I end up doing, I will be watching, participating, and updating. Likely writing about it over the weekend.

Take inspiration from this event. You may or may not agree with any, or all of the mission – but you cannot deny it is a powerful statement being made, and it is putting Canada front and center as a country to finally be admired.